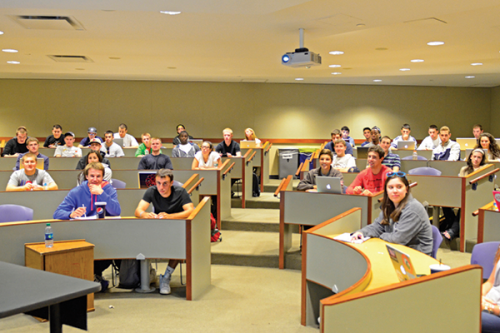 Imagine waking up before 6 a.m. to get ready for a class or sitting in a lecture hall listening to your professor along with 60 other students. Although Quinnipiac is known for having smaller classes of between ten to 30 students that begin no earlier than 8 a.m., this semester more than 800 students at Quinnipiac are experiencing larger class sizes and 7 a.m. classes. 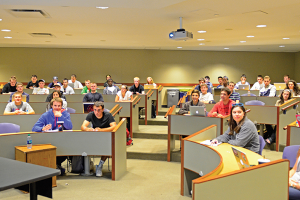 The university currently has 19 class sections with an enrollment of 40 or more students and one QU 201 class that runs from 7 a.m. to 7:50 a.m., according to Assistant Registrar Jamie Lussier, who is in charge of scheduling course sections to academic spaces.

She says that the larger classes are often double sections, with two regular classes of around 40 students coming together to form one large lecture class.

There is no shortage of space on campus; the North Haven campus has lecture halls that can hold up to 120 students, and recent renovations on the Mount Carmel campus will open up more classrooms, Lussier said.

Lussier explains that each school puts together their own courses, deciding the time they will be offered and how many students can be placed in each class .

“The schools are given a certain amount of academic spaces they can use during a certain amount of times; for example, five time slots Monday, Wednesday and Friday at 8:00 a.m.,” she says. “Then they fill in their course sections as they want them.”

Upon receiving each school’s course listings, Lussier then schedules the time slots to the appropriate classrooms on campus, taking into consideration the number of students in a class and the preferences of the professors. This process may change because of a new scheduling software the registrar’s office will begin using in the near future.

Sophomore Danielle Arcement is part of the QU 201 class, and she says having a 7 a.m. seminar is not as bad as she expected.

“I thought it was gonna be worse than it actually is,” Arcement said. “Maybe it’s because I’ve been getting used to it, but it actually doesn’t feel that early.”

“I feel more productive; I feel like I get more sleep,” she said. “I know that everyone says, ‘I could never take a 7 a.m. [class], but it’s not as bad as you think. Judging from the way this is going, I’d probably take another one in the future if it was offered.”

Professor John Morra teaches a double-section Sports Studies 101 class with 60 students. The class is held in room 107 at the College of Arts & Sciences, a theater often used for tour groups of prospective students.

“It’s intimidating when you have 60 students in front of you, but a large classroom has a lot more energy,” he said. “Everybody’s into what you’re talking about, and someone always is willing to discuss or speak up. Some people like larger classes because they just want to sit and listen.”

Although some students may feel that their professor will not know them well in a large class, Morra said there are always opportunities to connect with a professor, either by seeing them before or after class or by scheduling an appointment.

According to the admissions office, the incoming freshman classes have been increasing every year, meaning that larger and potentially earlier classes could become more common.

However, Lussier says that the decision really lies within each school at Quinnipiac and with the academic affairs office, since the schools are the ones in charge of filling their own classes.

“I think a lot depends on the type of class and the type of professor,” Morra said. “Some classes are better with more students, some with less, and some professors are also better in one environment or the other.”