9/11: Recollection of a tragic day 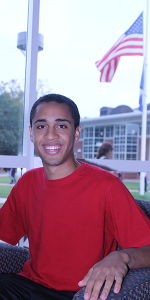 Sept. 11, for me, is a tale of two stories. At the time, I was in second grade at a small private school in Queens, N.Y., about a 35-minute subway ride from the World Trade Center.

We started off the school day like we would any other, playing in the school parking lot across the street. The teachers told us to line up and that’s when I got my first glimpse at what happened.

Being in second grade, looking both ways before crossing the street was a must. As my friends and I looked to the left, we could see a thick, black cloud of smoke. The towers were 10 miles away, but they were so much taller than every other building. They always stood out, but even more so in retrospect.

The teachers moved us into the gym without saying much. Within a few minutes, the entire school was there and parents started running in and taking their children home.

Still not exactly sure what was going on, my mom finally came with my sister to take me home. When we got there the TV was not working. We had an antenna on the roof, but the signal was knocked out because the main antenna was on the roof of the first tower.

Don’t get me wrong, I loved having a day off from school, but I couldn’t help but wonder why. One thing I remember more than anything else is the pensive expression my mom had. I had never seen her tear up before so at that point I figured whatever happened, it was pretty bad.

This is where the second part of my story starts. My dad was a NYPD Lieutenant in Lefrak City, Queens, at the time. He normally worked the 9-to-7 shift at Lefrak, except on Sept. 11, he had to drop off court files at the New York City Law Department, just three blocks from the World Trade Center site.

He hopped on the E train bound for the last stop, World Trade Center. As his train pulled into the second-to-last station, Canal Street, the conductor said: “There is a smoke condition ahead, this is the last stop.” So my dad exited the station and reached street level, where hundreds, if not thousands, of people were running north to get away from the towers.

When he arrived at the Law Department, he spoke with another lieutenant who informed him that a plane had hit the first tower and a second plane was on its way. That lieutenant directed him to police academy where he was placed on the switchboard.

He fielded telephone calls from concerned parents of students at Stuyvesant High School next to the WTC site. In response to the threat, the city’s police commissioner Bernard Kerik and fire commissioner Salvatore Cassano were moved to the police academy and my dad fielded calls from people trying to contact them. For three days he didn’t come home. For three days after that, he worked 12-hour shifts.

Looking back, I can see why my mom was so pensive; my dad was a police officer who had planned to travel to the WTC on the same day hijacked planes were used as weapons against it.

My dad, being technologically challenged, didn’t have a cell phone or pager or anything like that, so my mom had no idea where he was until Sept. 13, 48 hours later, when he called home saying he was OK.

Due to the nature of the incident my dad had to keep several bits of information private, even years after it happened.

Coming to Quinnipiac, I wasn’t sure how those from outside New York City viewed or were affected by 9/11. My whole life I had been around people who experienced the same things I did: school, sports venues, government buildings closed, public transportation shut down and mass chaos for days.

The thing that touched me the most when I came here was how many people wanted to know my experience because they’ve only seen it through the news. Coming from New York City, people always want to know what it’s like living there, but also what living with 9/11 was like.

I don’t remember much from the days after the tragedy. School was closed for several days and I didn’t go outside much. The T.V. was out for several days. Basically everything that was routine, for the next week or so, was no longer routine.

In the first few days back in school, I remember there being an emphasis on our morning routine which consisted of reciting the Pledge of Allegiance and Star-Spangled Banner.

Almost every year since then, I’ve had the opportunity to discuss our emotions from that day in class, but each year it moved further and further back into my memory–that is, until May 2, 2011 when word first came out that Osama Bin Laden was killed. People gathered at Ground Zero, Times Square, and parks throughout the city to celebrate. On the 1 train, a group of what had been random strangers returning home from work began chanting “USA, USA, USA.”

Looking back, I’m almost glad I wasn’t old enough to understand what really happened in the moment. While no one I knew personally passed away, I did have friends whose parents worked there.

As a New Yorker and as a citizen of the United States, I’ve never felt more connected to people I’ve never met before. 9/11 made us stronger and opened our eyes to the world around us. It built a connection between complete strangers that we will never forget.