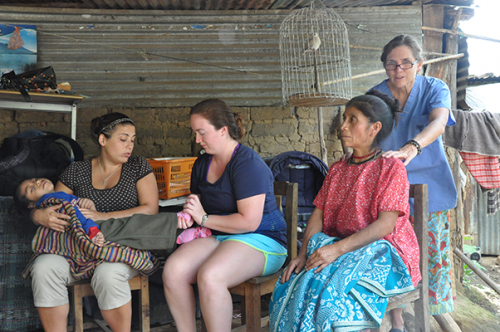 This July, Associate Professor of Physical Therapy Maureen Helgren, Associate Director of Fitness and Wellness Tami Reilly, seven students and an alumna spent 12 days in Guatemala as part of a service trip through the Albert Schweitzer Institute. 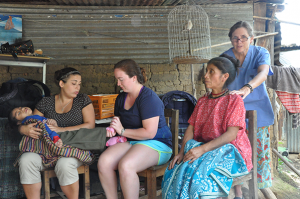 The students, mostly physical therapy and occupational therapy majors, treated patients in their home or at a clinic. The majority of the patients were children with chronic disabilities. According to Helgren, the students work with the children’s families and educate them about health.

“One of the purposes is not to go down there for just for a few days or a week to give physical therapy or occupational therapy and then leave and have it not matter,” Helgren said. “It’s really much more about education and using our skills and our knowledge to try to educate the caregivers or look at the environment that they’re in and try to adapt the environment that they’re in to try to make their lives more functional.”

Reilly’s friend Andrea Torre runs a business in North Haven called Hair Replacement Concepts, which helps women pick out a wig in preparation for chemotherapy. Women often give their wigs back to Torre, but it is against the law to reuse wigs in the United States. Torre began giving the used wigs to Reilly, who has sent them to Guatemala and Nicaragua. This summer, the group delivered 70 to 80 used wigs.

“It has been cathartic on both ends,” Reilly said. “[The Guatemalan patients] don’t have the money for treatment, let alone to spend the money on a wig so they’re really thrilled to have that. Then on the other hand, maybe people who held onto a wig for a really long time from a family member they lost or went through the struggle themselves and are so happy to be sharing what they have with somebody else.”

The group also had the chance to meet Guatemalan medical students. Speaking with these students made Yessenia Argudo, a behavioral neuroscience major and the Spanish interpreter on the trip, realize that she wanted to go to medical school.

“I could see their passion for it and I could see myself doing what they were doing,” Argudo said “Just after going to the trip, it doesn’t matter how many years I have to study before I actually pass the MCATs. I just know that is what I want to do.”

Senior occupational therapy major Kelly Meara has already seen how much this experience has helped her within the first couple weeks of classes.

“We saw a lot of kids with CP, cerebral palsy, and we were learning about that in class and everything that the teacher was talking about, I had all these pictures of all these kids that I held,” she said. “Coming home I knew that I learned a lot but I didn’t really know what I had really learned besides that I loved being down there.”

A third-year graduate student in the physical therapy program, Michele Wolff, and Reilly also got the chance to teach yoga to the Guatemalan women. Wolff enjoyed this opportunity, especially when she saw the impact it had on one woman.

“She was just so grateful to have company almost,” Wolff said. “We put her in meditation and we just left the room she was so happy. She was so peaceful. I would close my eyes doing the pose and she would do the same. She didn’t even need to see what I was doing.”

Seeing how hard working the women were impacted Wolff.

“I felt when I got back I wanted to strive more because they do so much,” she said. “They’re multitasking to the next level and like their mind must never shut off. I go home, I go to class. I would go to my internship and I’m like, ‘I don’t want to do anything’ and my day ends. And they just keep going and they have no other choice so I’m like, ‘I’ve got to do better.’”

Helgren also came up with a way to have a lasting effect on the impoverished community they visited. She loaned each of the students $150 of her own money to spend on items made by Guatemalans. In the near future, the group plans to sell these items to Quinnipiac students on the North Haven campus. The proceeds will go to a scholarship for one of the children in Guatemala.

“When you go there you feel so guilty because you’re coming from a country where you have your food on your plate,” Yessenia Argudo, a behavioral neuroscience major and a native Spanish speaker who translated for the group. “But is funny because when the groups go to Guatemala from the first day to the last day, you see that they leave less food and less food and less food on their plates and then by the end of the trip the plates are completely cleared.”