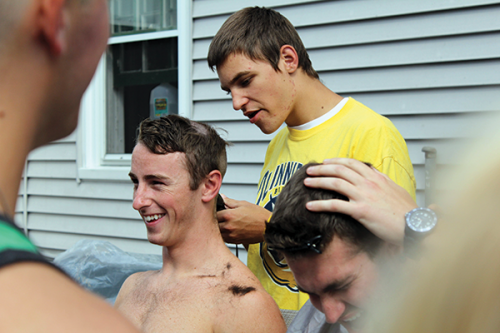 When senior Brian Blake was diagnosed with metastasizing cancer — cancer that has spread to other parts of his body — his long-time friends were quick to offer support. 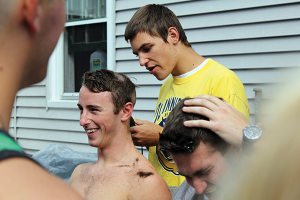 They became buddies when they were hallmates in Ledges freshman year. Three years later, the tight-knit group of guys still have each other’s backs.

Senior Mike O’Reilly made a Facebook event called “Go Bald 4 B-Blake,” so his friends could get together to support Blake and shave their heads with him at one of their houses on Saturday.

“He basically just dropped the news on us out of nowhere,” O’Reilly said. “We just felt we had to do something about it.”

They spread the word about the event on social media with the hashtag #Bald4Blake.

Once everyone came, the chairs were set up and the buzzers were plugged in. Everyone gathered around for the main event, O’Reilly took the first seat, and Blake gave him the first cut.

As the men took turns getting buzzcuts, the women died strands of their hair blue to symbolize their support.

In the backyard hung a yellow, hand-painted poster that read, “Go Bald 4 Brian Blake.” Students took to the poster to write shout-outs to their friend.

Instead of focusing on the trials cancer can bring, Blake and his friends have taken the “can” from cancer and are focused on what they can do to make his treatment easier.

“His fight is our fight, and now he’s got a whole army behind him,” senior Ryan Spencer said.

Blake will take the semester off and while he receives aggressive chemotherapy at Yale-New Haven Hospital, his friends plan to visit often.

“Our biggest priority is just letting him know that we’re here and him not forgetting that,” said fourth-year student Ernest Eusebio. “Since day one of college to graduation, he’s not going it alone.”