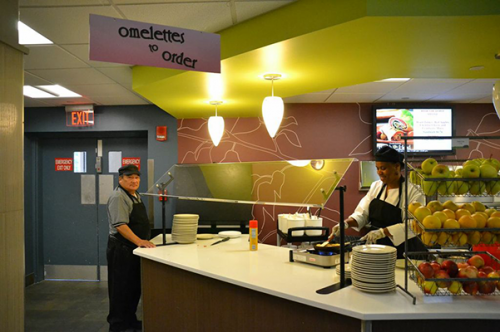 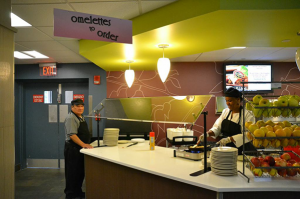 [/media-credit]With incoming classes larger by the year, long lines at Mount Carmel Dining Hall are the norm; especially during breakfast hours. In response to the demand, Chartwells introduced Breakfast All Day, a new omelet station.

“Over the last couple of years the breakfast and deli lines were starting to get too long,” said Joseph Tobin, Chartwells’ director of dining services. “With the addition of a larger freshman class, we decided we needed another breakfast line where we could serve eggs through lunch and later if needed.”

The new station can produce up to four omelets at a time and students choose how much of the ingredients they want as opposed to the old breakfast station, The Kitchen, where the cook selects the quantity of toppings.

“I think the new omelet station is an innovative idea, but from my observations it seems to take too long,” junior Dan Burdick said.

The Kitchen currently stops serving breakfast around 10:15 a.m., but the new station will remain open for lunch and alleviate some of the pressure, according to Tobin.

“The station has been well received and has helped with the morning rushes,” Tobin said.

Omelets at each station are the same price and should have similar toppings available.

“We will experiment with the egg line in the evening and if it is popular we will consider offering it through the evening,” Tobin said.

Breakfast All Day is just one of the few additions Chartwells has introduced to help provide a wide variety of food and quicker service.

This summer, Chartwells initiated Frozen All Natural Smoothies (F.A.N.S.) at the Bobcat Den, which provides a healthy blend of fruits with vitamins, protein and fiber.

While Chartwells does not plan to alter or add new food services, students may still voice their opinions to the staff. Tobin noted that although there are no current plans for changes, adjustments can be and are often made.

“We will  take requests for ideas from the Quinnipiac community, no matter how big or small,” Tobin said.