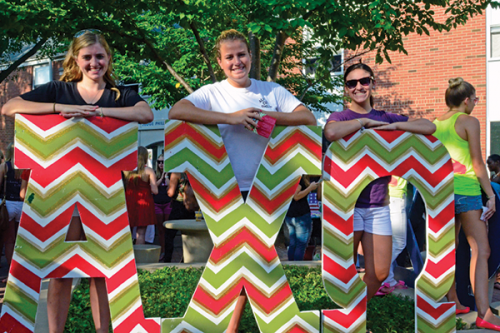 With the start of a new semester, students throughout campus are getting involved in new organizations, and for the first time ever, students can become part of the Greek community in the fall. 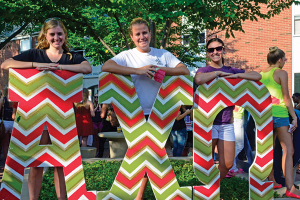 Recruitment for fraternities and sororities will begin this weekend and extend into next weekend.

The university previously held formal Panhellenic recruitment in the spring, but Greg Fink, the assistant director of the student center, said that fall recruitment is the normal process for universities around the country.

Senior and Vice President for Recruitment for the Panhellenic Council Caitlyn Martin is excited that recruitment has been moved to the fall.

“It provides the opportunity for freshmen to go out for recruitment right away, which can be beneficial for them in many aspects,” Martin said. “It is an easier transition in the sense that they can get involved right away and they don’t have to have that semester where they are not involved and then sort of re-teach themselves how to time manage.”

Jamie Mor, the graduate assistant for Fraternity and Sorority life said fall recruitment would have been beneficial for him as a freshman.

Mor, former undergraduate member of Delta Tau Delta, envies the incoming freshman.  “I wish I could have been able to have the opportunity to kind of do this while I was an undergrad student.”

Both Martin and President of the Panhellenic Council, Cara Gilmartin, believe joining the Greek community creates additional opportunities for involvement in other organizations across campus.

According to Gilmartin, statistics from campus life show that Greek life on campus makes up 30 percent of the Quinnipiac population, 25 percent being female and five percent being male. and that students involved in Greek life generally have a higher grade-point average than students who are not involved.

“You’re learning how to be a better version of yourself and you’re learning the difference between making a right decision and a wrong decision,” Gilmartin said. “People take those values that they learn in their organizations and they put it into their everyday lives.”

Some freshmen, however, say there are disadvantages to formal recruitment being in the fall.

“Fall recruitment is not a good idea,” freshman Andrew Croteau said. “Freshmen have so much to handle their fall semester, whether that is academics, clubs or a fraternity.”

Although she still plans to go out for recruitment, freshman Rachel Moran fears that joining a sorority right away may be overwhelming. “I wish it were still in the spring so I had time to still adjust,” she said.

Despite this fear, Martin believes the disadvantages are not overwhelmingly strong.

“I think that the advantages definitely outweigh the disadvantages but I think at the same time it might be overwhelming for them to have to make such a big decision right away,” Martin said.

Martin believes this is actually an advantage.

“Without any preconceived notions about any of our chapters on campus, they are going to really be going into recruitment with an open mind and this is exactly what we want for them,” Martin said.

Gilmartin mentioned that fall recruitment is easier on the chapters, yet different for what Quinnipiac is accustomed to.

“You have to sell for spring recruitment, and it’s more rare, which is something that the Quinnipiac campus doesn’t really know, because it’s all that we are used to,” Gilmartin said.

There are plenty of students that are excited for this change and eager to start the recruitment process.

Sophomores already involved in Greek life think that the change will be a good opportunity for freshmen that they were not able to have.

“I think it’s overwhelming at times, but I think fall recruitment is good because they will have a core set of friends and they will be committed to their sorority or fraternity,” Alpha Chi Omega member Kiera Murphy said..

“We can start building relationships early on in the semester,” Dylan House, a member of Pi Kappa Phi said as he expressed his enthusiasm to welcome new brothers.

And it is not too late to join for upperclassmen as well. Freshmen students are not all that the panhellenic council hopes to see.

“The important thing is that it’s not about first semester freshmen anymore,” Fink said. “It’s that anyone can join whenever they want to.”