QU hopes to continue to grow with largest freshmen class 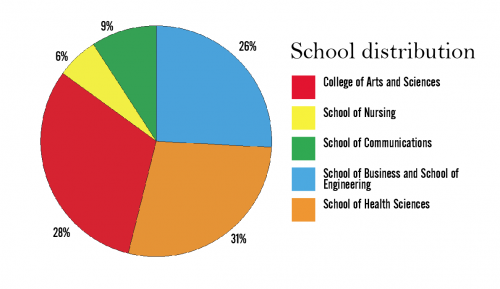 With an overwhelming number of 1,835 students, this year’s freshmen class is now the largest that Quinnipiac University has seen, and this may not be the largest for much longer. 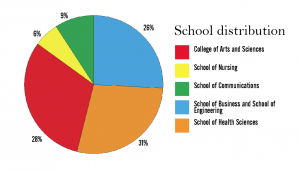 Quinnipiac is expanding each year, according to Vice President for Admissions and Financial Aid Joan Isaac Mohr. With the new engineering school, the university now has more to offer students.

“Growth in this year’s class is really due to growth in the school of health sciences and the fact that we have a new engineering program,” Mohr said.

Although there may not be enough room on the Mount Carmel campus, the York Hill campus has the ability to expand by a few hundred students, according to Mohr.

With more students being enrolled, diversity begins to overtake the Residence Halls. Mohr proudly announced that 18 percent of freshmen identify themselves as students of color. In the freshmen class alone, students have come from 27 different states and 30 different countries around the globe.

Students’ majors in the freshmen class are scattered among the wide variety of choices that the university offers.

However, the number of students in the School of Communications has decreased by 10 percent.

“I think each of the schools sort of follows whatever the current trends are job wise, as students apply,” Mohr said.

Although the university as a whole does not need to fear the amount of incoming students, the School of Communications hopes to work on increasing the number of students that enroll.

Enrollment in communications at colleges and universities leveled off not only here at Quinnipiac, but across the country, according to the Dean of the School of Communications Lee Kamlet.

Kamlet believes that students and parents do not realize the amount of jobs being created within the communications field.

Despite the rapid decline in the number of newspapers across the country, more jobs are being created in social media and other areas of communications, according to Kamlet.

Additionally, Kamlet says that the job descriptions altered and employers are looking for much different characteristics than they previously were.

“Communications students, whether they are journalism majors, public relations majors or film majors, need to know how to do all those things; they need all those skills,” Kamlet said. “The jobs are out there for the people that can do the multiple skills.”

Kamlet and his staff in the School of Communications hope to spread this message, and they are well on their way of doing so.

“There is lots of things going on in the School of Communications that I think bode well for us in the coming years,” Kamlet said. “We have been told by the administration that we are going to get more space and with more space comes the opportunity to provide new programs.”

Kamlet and his team are not disappointed by the decrease in freshmen enrolled in the School of Communications.