Hamden sandwich shops have come and gone, but there are two big competitors: Ray & Mike’s and Corner Deli. They have their differences: Ray & Mike’s is open every day from 6 a.m. to 10 p.m., and is right on Whitney Avenue. Corner Deli is on the corner of Dixwell Avenue and Evergreen Avenue and closed on Sundays with shorter hours. But the question isn’t which one is more convenient; the question is which sandwich shop makes the better sandwiches. We have three self-proclaimed sandwich experts weigh in and test three classic subs and evaluate which one is better. 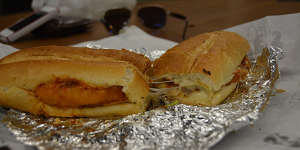 I had to choose Ray and Mike’s because Corner Deli’s was too soggy for me. There was definitely not enough cheese on the Corner Deli sandwich either.

There was no bad choice here, but the sandwich at Corner Deli had the perfect combination of sauce and cheese. The one at Ray and Mike’s was very consistent, but the Corner Deli’s sandwich stood out. -ME 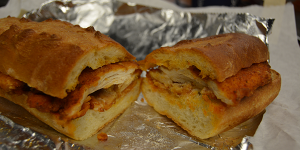 Definitely Ray and Mike’s for the Buffalo Chicken. There was way more buffalo flavor and Corner Deli had a little dab of ranch on it. Ray and Mike’s had just the right amount of sauce. -SH

Ray and Mike’s was clearly the better sandwich here. There was plenty of buffalo sauce and bleu cheese, and it was very flavorful. Corner Deli, on the other hand, skimped out on the sauce. -ME