This is me: Making a life out of service to others 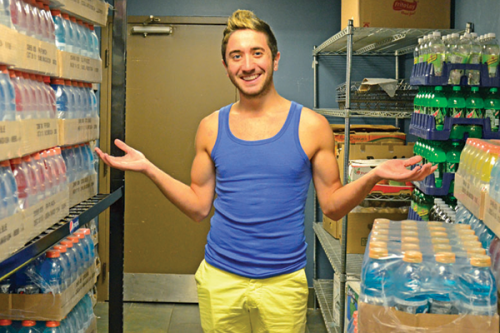 Stomping on the brakes, sophomore Alex Kriz brought his car to a screeching halt. Without a second thought, he jumped out of the car and took off running across the highway toward a car that was engulfed in flames. 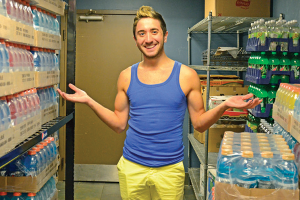 “That’s just what made the most sense at the time,” Kriz said. “To make sure everyone was alright, I guess.”

Approaching the burning car, he heard screams coming from further down the road. As he approached the area where the noise was coming from, he could see a man lying on the ground, and it soon became clear that he wasn’t breathing. Using the skills he learned working as a lifeguard at YMCA, he got down on the ground and began performing CPR until an ambulance arrived.

Two minutes after the paramedics arrived, the man was breathing.

That night, Kriz chose not to give his information to the man he saved. He did not want the recognition. Going out of his way for someone else was something he had always done, and he did not believe his actions that night should be treated any differently.

Kriz, who is a double major in psychology and legal studies from Northborough, Mass, has spent much of his life doing voluntary service for others.

“I would rather volunteer at something than have it as a job because volunteering means so much more to me,” Kriz said. “I’m not just saying that to say it, I’m saying it because it’s actually true.”

Kriz’s long history of volunteering began when he started to help organize and set up events at his childhood church, Saint Anne’s Roman Catholic Archdiocese, in Marlborough, Mass. He also began helping in an annual charitable walk in his community to support finding a cure for cystic fibrosis.

That was just the beginning.

Today, Kriz is involved in numerous organizations that involve volunteer work, mostly involving children. Kriz enjoys working with children and intends to be a second or third-grade teacher after college. It was not the job he always envisioned himself having, he said, but now he could not imagine doing anything different. The people close to him believe he will make a great teacher.

“We don’t have enough male role models for children and I think he’d be a great one,” said Alejandra Navarro, Assistant University Editor and advisor of G.L.A.S.S.

Kriz is an executive board member for G.L.A.S.S., or Gay, Lesbian and Straight Supporters, which is an organization that offers a nurturing environment for all students regardless of their sexual orientation.

Kriz currently spends his summers volunteering at Camp Sunshine in Maine. According to Camp Sunshine’s website the camp is dedicated to offering children with terminal illnesses, and their families support, joy and hope throughout the various stages of a child’s illness.

“It’s just an incredible thing to see [the children] so genuinely happy about everything even though they’re probably in the worst circumstance anyone could ever be in,” Kriz said. “It’s something that many adults don’t come to realize. How to be truly happy about something and truly appreciate somethings in your life.”

In addition to Camp Sunshine, Kriz is an active volunteer in Restavec Freedom Alliance. Members of this organization go to Haiti and visit orphanages that house children who were saved from being sent into slavery.

“It was our job to make them feel like they are the greatest things in the world, and actually just go and love them and make them know that they are a real awesome person no matter what,” Kriz said.

Upon his arrival in Haiti, however, he feared that the children would not like him. He needn’t have worried.

“The kids loved him,” USA Program Director of the Restavec Freedom Alliance Ellen Donohue said. “He will be a teacher that every child will look back upon when they are adults as someone who changed their lives. I believe that he did some of that in Haiti.”

Kriz also spends time volunteering as a gym teacher at a local private school. He still recalls the reaction of a group of elderly nuns who worked at the school when he approached them and offered his assistance.

“They were so excited that I wanted to help them because they were like, ‘we’ve always wanted a volunteer gym teacher because we are so old and can’t do anything with the kids,’” Kriz said smiling.

Along with this, Kriz spends time volunteering as a tutor for children in a non-profit literacy center in New Haven.

Understanding that the end of the year means extra meal plan money, Kriz is hoping to create a program at Quinnipiac to use that money to serve others. Kriz is currently working toward creating a program where students collect leftover meal plan money to buy bulk food items to distribute to food banks in Hamden and New Haven.

Kriz came up with the idea when he noticed how many students  had a lot of extra money on their meal plans.This money would normally just end up going back to the school at the end of the year, he said.

It’s a program that he hopes to start before he transfers to a new school this fall. Kriz is already involved in four organizations on campus, but always wanted to start his own. He hopes to leave a mark on Quinnipiac even after he leaves.

Although the program is still unofficial and only about a week old, Kriz has already managed to raise about $5,000.

With the numerous volunteer programs that Kriz participates in, he has even bigger plans for the future. After graduating college, Kriz intends to teach in Haiti for a year, then come back to the United States to be a teacher for Teach Across America. After this he hopes to teach in Italy for a couple of years. Then, once back in the United States, he plans on joining the Peace Core for two years.

“When you’re a doctor, you save people’s lives. When you’re a teacher, people normally think, ‘oh, well you teach kids.’ You change kids’ lives, you don’t save their lives, but you change them for the better,” Kriz said.

For right now, Kriz is perfectly happy with what he is doing day-to-day. Each day, he embraces the opportunity to help others, and maybe even teach them a thing-or-two.

One day he was going on a long run through a park. While he was running, he could see a young boy struggling to learn how to ride his bike. The boy and his mother were trying to figure it out, but it appeared that it was just not happening.

Forty-five minutes later, as Kriz was on his way back from his run, he saw that the young boy still hadn’t figured out how to ride the bike. Kriz offered his help.

Within 25 minutes, the little boy was finally able to feel the wind blow through his hair as his feet moved the petals forward. The child jumped off his bike and ran to Kriz and hugged him as he began to cry tears of joy.

“That’s the greatest thing that’s happened in a long time,” Kriz said. “Whenever I teach a kid something new, and they are trying to learn how to do it, I like to be that person who can help them get to it, and when they finally get it, seeing that look on their face; there is nothing like it.”