Rave: ‘Before I graduate I want to…’ 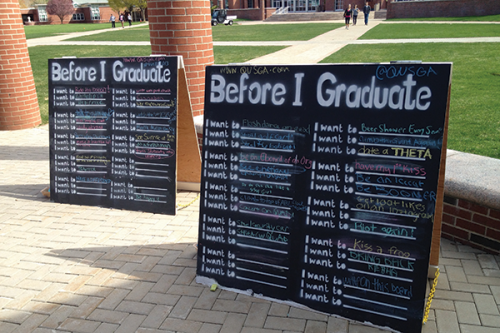 In a time where finals are giving students gray hair and migraines, professors are sending out study guides and roommates are getting on our last nerves, it’s time to think about the future, the fun future that is… What do I want to do before I graduate? 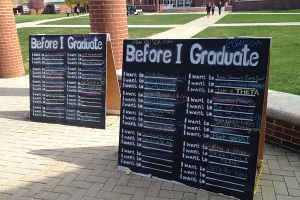 That’s a loaded question, especially for our seniors graduating in two more weeks. The most time that current undergraduates have is 3 years, and in those three short years, it may seem difficult to realize all of the goals that you want to accomplish.  Most students focus on their schooling, their extra-curriculars, and their social lives, but what about the marks that they will leave here at QU? How will we be remembered when we graduate?

SGA put out chalkboards on monday afternoon with sidewalk chalk and the open ended sentence “Before I graduate I want to…” and left the rest up to any student who happened to walk by. Some students filled in the blanks en route to their classes.

Some people wrote down their hopes and dreams (or ridiculous antics involving the infamous Java John). Some were ambitious  “Cliff jump off of sleeping Giant” and others were simple “To make dean’s list”.

Whether an outlandish goal or a fairly modest one, our rave of the week goes to SGA for making QU students think about their goals, instead of their infinite to-do list. This was a great way to show  QU’s creativity and ambition.  Great job SGA, keep that QU spirit alive!