Quinnipiac recommitted to the women’s volleyball team on April 26 when it settled Biediger, et al. v. Quinnipiac University, a lawsuit filed by members of the team. Athletes on the volleyball team sued in 2009 after the university tried to eliminate the team and replace it with competitive cheering. 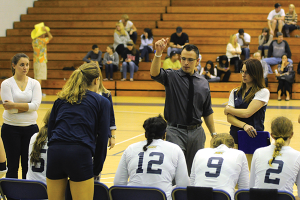 [/media-credit]With the proposed settlement, the university agreed to keep the volleyball team for the next three years, Vice President for Public Affairs Lynn Bushnell said. U.S. District Court Judge Stefan R. Underhill still must approve this consent decree. The university will notify female athletes about the agreement and the athletes will be able to submit their objections or approvals of the consent decree, according to Jonathan Orleans, an attorney from Pullman and Comley LLC who represented Quinnipiac female athletes. Underhill will consider this feedback and approve or disapprove the consent decree on June 20, Orleans said.

“We on the plaintiff side, and presumably Quinnipiac, think that the decree is fair and reasonable and in the best interest of the class,” Orleans said. “We think that it should be approved and we’re very hopeful that the judge will approve it.”

The consent decree will be in effect until 2016, in which time the university should be in compliance with the federal law Title IX, Orleans said. Title IX, which started in 1972, is a law that requires that schools have equal opportunities for females and males.

“I think we accomplished a lot for female athletes at Quinnipiac,” he said. “I mean, if you just go through the consent decree and see all of the various benefits for women’s athletes that the university has committed itself to provide and the money it has promised to spend.”

The university’s facilities will also go under renovation because of the settlement. Quinnipiac will spend at least $5 million to improve athletic facilities other than the TD Bank Sports Center that its women’s varsity sports teams use. It will also construct an indoor track & field facility for practice and competition that will meet NCAA standards for hosting indoor meets, and will upgrade its field hockey and women’s rugby facilities.

“The agreement with respect to fields and facilities improvement were all things the University had already planned to do but were delayed because of the litigation,” Bushnell said. “Both women’s and men’s facilities and fields require and will receive significant upgrades.”

The court will appoint a “referee” to help implement and monitor the university’s compliance with the obligations.

“If the university remains in violation of the law [in 2016], then the university could be sued again at that point, but certainly we all hope that won’t be necessary,” Orleans said.

In the 2008-09 season, when Quinnipiac wanted to cut volleyball, the team’s budget was $70,384, not including coaches salaries and athletic scholarships, according to the Biediger, et al. v. Quinnipiac University case brief from 2009.

The university will pay $15,000 to Stephanie Biediger, Kristen Corinaldesi, Kayla Lawler, Erin Overdevest and Logan Riker, the volleyball players who brought forth the lawsuit, within 30 days of the Court’s final approval of the consent decree in satisfaction of individual claims. It will also pay and the Class Counsel $1.9 million for attorneys’ fees and costs of litigation.

“I think all of us took that on knowing we would not just be helping volleyball, we would be helping all the athletes there and across the country because this was a case of national importance,” said Robin Lamott Sparks, Quinnipiac’s former volleyball coach who helped push the case to court when the university attempted to rid the program.

In 2010, Underhill ruled that Quinnipiac could not get rid of the volleyball team because that would mean the university would not provide the same athletic opportunities for men and women. The U.S. Court of Appeals for the Second Circuit upheld Underhill’s decision in August 2012. Quinnipiac then added the acrobatics and tumbling and women’s golf in 2010 and women’s rugby in 2011 to try to satisfy Title IX requirements, according to a press release from the American Civil Liberties Union of Connecticut.

On March 4, 2013, Underhill ruled that Quinnipiac still could not eliminate the volleyball team because women’s rugby and acrobatics and tumbling did not provide women with the same competitive opportunity as men, according to the press release from the American Civil Liberties Union of Connecticut.

“The competition test is one aspect of that that was clarified through this case that makes clear that the level of competition that are provided to men’s team and women’s teams have to be equivalent,” Orleans said. “That is a significant precedent that was set in this case.”

The university will now decide whether or not to get rid of the acrobatics and tumbling team, Bushnell said.

“Given the judicial rulings regarding acrobatics and tumbling in which the Court has ruled that Acrobatics and Tumbling is not in its view an approved NCAA sport for Title IX purposes, the University will have to review its status and continuation going forward,” she said. “The University currently sponsors only NCAA-approved intercollegiate sports and not club sports.”