Graduate student and former men’s basketball player Garvey Young has found a way to combine his interest in business and his love for sports. Young developed a social branding website called DraftSpot, which makes the athletic recruitment process more efficient by connecting athletes and coaches. 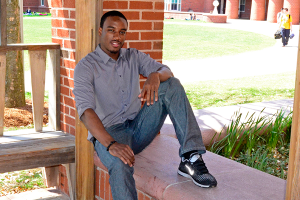 On April 12, Young won the $5,000 first prize in the School of Business’ Business Plan Competition for DraftSpot, which is currently in its pre-launch phase.

The projects in the Business Plan Competition are judged on the viability of the business and the passion of the students, according to David Tomczyk, assistant professor in the Department of Entrepreneurship and Strategy, who advised the judges in the competition.

“There’s no other service out there right now that actually does that and so he is using the most recent rulings,” he said. “He’s keeping up to date with all that and he’s allowing players to create a personal brand.It allows people to build up, not only their brand, but also a following.”

Young’s enthusiasm for his idea shone through when he presented his plan to the judges and was one of the reasons he won, Tomczyk said.

“He did a really solid presentation,” Tomcyzk said. “You can tell that he’s really passionate about this, largely because he’s an athlete himself, so this is something that’s really near and dear to his heart.”

As a student-athlete, Young has experienced some issues with the athletic recruitment process that he believes DraftSpot solves.

“I’ve noticed that a lot of talented athletes never get to make it to the next level because of the lack of exposure and I’ve noticed that a lot of coaches often are very talented at finding talent, but often need to work on connecting with their athletes,” Young said. “I think [DraftSpot] is a product that is very needed and fixes a very significant problem in the recruitment.”

Young first came up with the idea for DraftSpot for a final project in his computer science class in the spring of 2012.

“I kind of had that moment where I realized every experience in my last five years has prepared me to develop this product, the last ten years, my whole sport’s career,” he said. “And everything started to click.”

Young worked on the business plan for DraftSpot last summer. Then Young took this business plan into his ENT 410 Business Plan Creation class last semester where he worked on the project with his classmates Ethan Rees, Kyle Cook and Diana Hernandez, to compete in the Media Innovation Collaborative Business Plan Competition. The team took first place in this competition, as well, Young said.

Rees, Hernandez and Cook did not have time to continue with DraftSpot, but Cook said he recognized its potential from the beginning.

“I knew it was going to be one of the top ideas in the class because of how much [Young] had prepared already,” Cook said. “You could see the passion he had for it. He is a college athlete so he has really good insight, really good connections.”

“I wasn’t allowed to play as much toward the end of the season, but instead I kept slowly progressing with the business plan to the point where I was able to win the competition in the spring,” he said. “My experience after my ankle injury have prepared me for future trials, future situations.”

Young said that these setbacks will benefit him as he continues to work on DraftSpot while playing basketball with the FIBA International Basketball Federation.

“I think my ability to learn from [failure] and to not give up after failures have helped me become better at balancing both [basketball and DraftSpot],” he said.

Young will continue working on DraftSpot, but will take a break in June when he volunteers as a teacher in Ghana. Afterward, Young will prepare DraftSpot for its beta test in the fall where Quinnipiac student athletes will be participating in the beta test.