Professors across campus are integrating technology, including smartphones, in their classrooms.

A Student Watch study conducted by OnCampus Research in Ohio showed that more students are using their smartphones during classes and for coursework than in previous years.

A fall 2012 study showed that 71 percent of college students indicated that they were using a smartphone. Only five months later, a similar study was done showing that nearly 80 percent of students owned a smartphone. This was approximately a 10 percent increase in a short amount of time.

Quinnipiac University also has seen an increase in the use of mobile devices on campus. According to Vice President – Chief Information and Technology Officer Fred Tarca.

Currently with an undergraduate population of 6,500 students, there are more than 25,000 wireless connections of more than 200 varying brands accessing both the BobcatNet and Guest networks; many of these being from mobile phones, he said.

Additionally, the university recently subscribed to an app that allows students to use Blackboard on their smartphones. There were 342 students this past month alone using the app, according to Tarca. 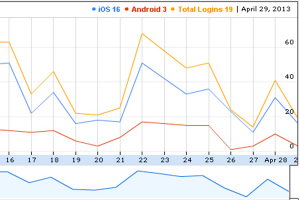 However, Tarca said Quinnipiac has not promoted the app, so some students, like freshman Lindsey Doane, are unaware of the app.

“I would love to get Blackboard right on my iPhone,” Doane said. “It would be really convenient for classes and registration.”

Although the university is subscribed to the app, the app store charges students $1.99 per year or $5.99 for unlimited use.

Students can find information about how to download and use the app on MyQ.

Professors at Quinnipiac have also seen an increase in the number of smartphones that students have and are encouraging students to use their smartphones when necessary.

“I actually encourage them to use their smartphones and laptops,” Professor of Communications Phillip Cunningham said. “In some ways however, students are showing resistance to it.”

Cunningham said although students have their smartphones and laptops with them during class, he will ask them to define a word and they will look at him with blank stares when they could easily resort to Google for the answers.

“Students will have their computers or smartphones right there and they won’t look it up,” Cunningham said.

Technology is growing rapidly and both students and professors are searching for means to keep up with the growth.

“I think he keeps up with the growing technology, making students really use it to their advantage,”said Jennifer Porka, a student of Cunningham’s last semester.

There are some classes where technology is almost a necessity, and others where it is not really needed, according to Professor of English Len Engel.

“I just don’t feel that technology is necessarily needed in English classes,” he said.

As an English professor, Engel does not use technology within the classroom. He prefers his students to read the various texts in print where they can annotate and highlight directly in the margins. He does encourage students, however, to look up word definitions while they are reading outside of the classroom.

On the contrary, Professor Cunningham said that he is comfortable reading PDF files on the computer rather than having the text in print form.

“I have grown accustomed to reading things online, but sometimes it seems that the students still haven’t,” Cunningham said. “As a relatively young professor, I have been able to grow with the technology because I was a student not too long ago.”

As time evolves, Cunningham and Engel both agree that smartphones will become an important part of colleges.

Professor Cunningham believes that as Quinnipiac University continues to grow, the use of technology will continue to grow for students and professors alike.

“In order to distinguish this university from others we are going to have to have a sort of full integrated technology use,” he said.