Relay for Life: Why QU walks 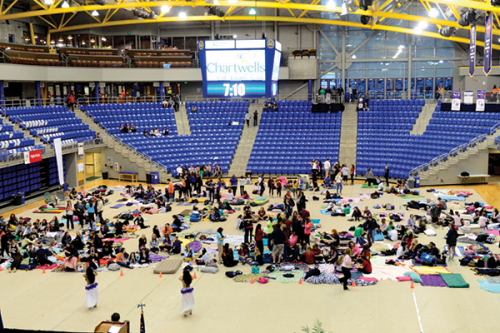 Quinnipiac University hosted their sixth annual Relay for Life event this past Friday at the TD Bank Sports Center on the York Hill Campus. 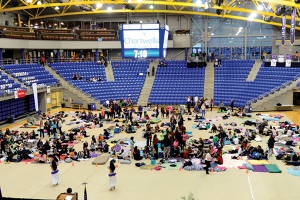 Relay for Life is a walk that is held to help raise money for cancer research. The walk is meant to help find a cure, celebrate cancer survivors and mourn loved ones that have been lost to cancer.

Quinnipiac University students attend Relay for Life for all different reasons, and many are among the vast majority of Americans whose lives have been forever affected by cancer. In 2008 the National Cancer Institute estimated that nearly 12 million people living in the U.S. had a history of cancer, and an average of 1,500 Americans die every day as a result of the disease.

Sophomore Katie Winkle was there not just as one of the five event co-chairs, but as a cancer survivor who was diagnosed with leukemia during June of 2006.

“Being diagnosed with leukemia was such a life changing experience,” Winkle said. “It was an experience for the better.”

Winkle, who has participated in Relay for Life for seven years, was also at the event to support campers from Camp Rising Sun. Camp Rising Sun, in Colebrook, Conn., is a free camp for children who are past or current cancer patients. Winkle began attending the camp herself in 2007 and became a counselor in 2011.

At this event, Winkle was supported by members of Kate’s Krew, which consists largely of Winkle’s Alpha Delta Pi sisters. They wore red shirts with the words Kate’s Krew on them, and the phrase “all for one – one for all.” Kate’s Krew started as a part of Winkle’s softball team in her hometown Orange, Conn., and has since transformed into the trademark for Winkle’s battle with cancer.

Many other Relay for Life participants walk to support their parents and other loved ones, whether they are fighting cancer, or have passed away because of it.

“It feels really good to be here,” Blitz said at the event. “I feel like he’s watching over me and it’s nice to know that.”

Freshman Melissa Griffith was at Relay for Life to honor her grandmother who passed away from lung cancer during her freshman year of high school. Griffith, who has participated in the event for six years, created a team named Pirates of the CUREibbean. The team was in honor of her grandmother, whom Griffith called “not just a grandmother, but a mother and a best friend.”

Freshman Jaclyn Mahon, a committee member of registration and finance at the event, was there to support her nonna who had breast cancer. Sophomore Anthony DeCandia was also there to honor his grandmother at his third Relay for Life event.

Others, such as senior Gina Trovato participated to honor non-family members who have been affected by cancer. Trovato recently suffered a medical scare and was able to lean on her boyfriend’s mother–a breast cancer survivor–for help.

“She was my rock during my rough patch,” Trovato said. “It was really important for me to be able to talk to her. If I did not have her, I do not know what I would have done in that situation.”

Trovato was also there in honor of a friend’s father who survived cancer.

Sophomore Jessica Nerger, a member of Kate’s Krew, was there to also honor her favorite teacher from high school. He passed away the summer before Nerger entered Quinnipiac University as a freshman, but left a lasting impression on Nerger by inspiring her to become a gerontology major.

There are countless stories of people in the Quinnipiac community whose lives have been forever changed by the effects of cancer, both directly and indirectly. It is truly a hard-hitting and widespread issue, and some participants at Relay for Life, such as sophomore Jenna Mojkowski, were there to provide support for their friends, and for the cause as a whole.

“Everyone has someone who has been affected by cancer,” said Mojkowski. “It affects everyone in some way.”