Fall Out Boy works to ‘Save Rock and Roll’ 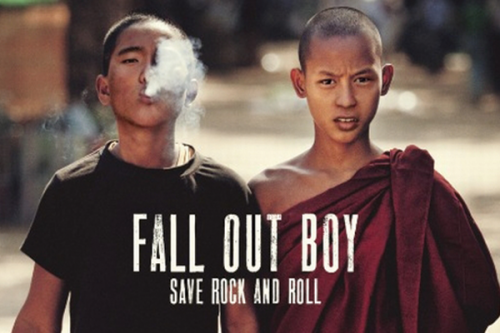 Nobody thought it would happen again; but Fall Out Boy has released a new full-length album fully re-charged and celebratory of their reunion, which was announced this past February. Save Rock and Roll was officially released April 15 through April 16 worldwide and stayed at #1 on iTunes for several days following. If you were expecting the similar pop-punk melodies of some of their past hit songs “Sugar We’re Going Down,” “Dance, Dance,” or “Thx Fr Th Mmrs,” you will be surprised to hear Fall Out Boy striking a note they never stuck before. 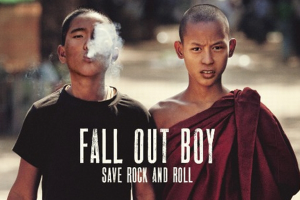 After the shaky release of their 2009 album, “Folie a Deux,” lead vocalist/guitarist Patrick Stump, bassist Pete Wentz, guitarist Joe Trohman, and drummer Andy Hurley, decided to take some time apart. Four years later they surprised their fans with the creation of a full length album, a new single “My Songs Know What You Did in the Dark” and many sold out tour dates stretching across the globe. Their successful reunion follows in the footsteps of punk bands Blink-182 and Yellowcard, and goes to show that it is sometimes valuable to take breaks.

Fall Out Boy stated on their website that Save Rock and Roll was recorded in secret for a year and a half; making these 11 tracks purely from their own hearts. However, there are some surprising collaborations featured on the album, such as Big Sean, Courtney Love, and Elton John. Though the title indicates their attempt at reviving rock music, the songs themselves stray drastically from the genre. It is used more metaphorically, saying “these incantations are meant to conjure realness, to unlock whatever the rock and roll is inside each of you.” FOB show their willingness to experiment and genre-blend.

Songs such as “Alone Together,” “Where Did The Party Go,” and “The Mighty Fall” are more for fist-pumping than head-banging. “Death Valley,” begins with cuts that sound like classic FOB, but transforms into a verse of dub-step. The majority of the album is comprised with a steady ready-to-dance beat.

“We made this music for ourselves and no one else at the end of the day,” FOB said in a blog post. “This is meant to be played loud, with the windows down on summer nights.”

Nevertheless, songs such as “The Phoenix,” and “Young Volcanoes,” bring a classic 2003 FOB vibe that many fans have missed. The band definitely stuck to their powerful lyrics, using many metaphors and key phrases in their verses. Stump’s voice does not sound like it took any breaks, and he still hits every note in a way that stretches effortlessly over pop-driven melodies. Fall Out Boy makes it clear they are here to celebrate their existence as a band and want to share the joy of being back with their fans. Save Rock and Roll is the beginning of a new era for Fall Out Boy.