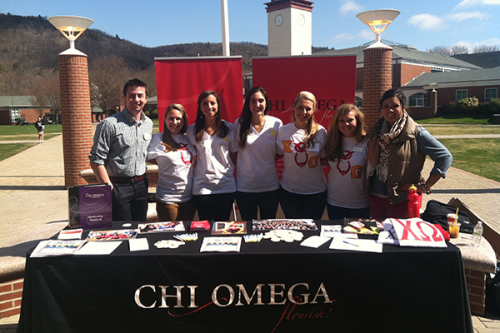 Students will have the opportunity to become the Founding Sisters of the Quinnipiac chapter of the Chi Omega Fraternity, the largest sorority in the National PanHellenic Conference and the newest Greek organization to come to campus in the fall of 2013. 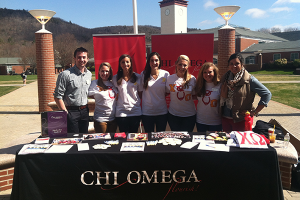 [/media-credit]Chi Omega was founded in April 1885 at the University of Arkansas on the values of friendship, personal integrity, academic excellence and intellectual pursuit, community and campus involvement, service to others, and personal and career development, Director of Communications for the Chi Omega Fraternity Whitney Heckathorne said. At the time, the term ‘sorority’ did not exist, so the official title of the organization is Chi Omega Fraternity. Chi Omega is also associated with the Make a Wish Foundation, she said.

Representatives from Chi Omega set up tables outside of the Carl Hansen Student Center and held information sessions last week for women interested in joining the sorority.

Chi Omega representatives will return in August, Heckathorne said. The recruitment process for Chi Omega will begin after the other Greek organizations on campus have their formal recruitment in the fall, she said.

However, Alison Silverman of Pi Beta Phi has mixed feelings about a Chi Omega chapter at Quinnipiac. She is worried that having another sorority on campus will make it difficult for the other Greek life organizations to recruit the number of new members they need.

“I think it’s good and bad,” she said. “With a new sorority on campus it is going to make our requirements a lot bigger and that is taking away from the requirements that we have to fill, but I mean it is good because people are starting to get into Greek Life more.”

Five years ago, 411 student were in Greek Life. Last year, Greek Life grew to more than 1,300 students, Associate Director of Student Center and Campus Life Courtney McKenna said in a previous interview with The Quinnipiac Chronicle.

Heckathorne believes Quinnipiac is the place to be for Chi Omega.

“The school’s values match Chi Omega’s values and so we know that the student body could provide great members who are a great fit for our organization,” she said. “We know Quinnipiac has had a surge in Greek Life over the past several years and Chi Omega is always looking for wonderful new schools where the students share our values so we can give them the opportunity to have the Chi Omega experience.”

With 174 collegiate chapters and more than 300,000 members, Chi Omega offers many networking possibilities for members, she said.

However, Heckathorne believes the community among her sorority sisters is the greatest benefit that Chi Omega offers to its members.

“It’s for a lifetime,” she said. “It’s not just the collegiate experience. It’s an experience that they’ll be part of for the rest of their lives.”