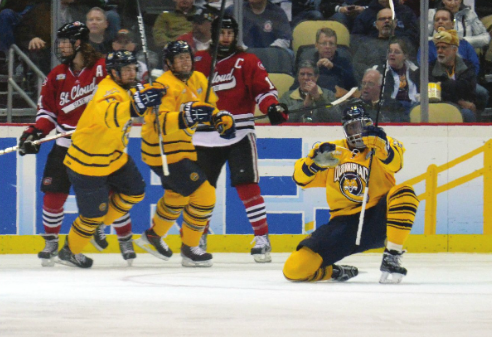 In a season of firsts and shattered records, the Quinnipiac men’s ice hockey team made it to the Frozen Four and national championship game. Here, it was able to experience a well deserved weekend in the national spotlight of the Steel City and culminated a season students will never forget.

After the win over St. Cloud State in the semifinal, Quinnipiac had put itself on the biggest stage in college hockey and needed just one win to be crowned champions of its sport. 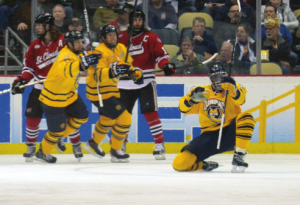 [/media-credit]Following the final whistle of the 4-1 victory, the speakers at the CONSOL Energy Center blasted out:

This of course, is the chorus of “Times Like These,” a song written by Dave Grohl of the Foo Fighters. At the time, the team most likely didn’t notice what song was playing as their adrenaline had their hearts pumping at 150 percent.

But after falling short in the final 21 minutes of the national championship game to Yale, the song is indicative of Quinnipiac’s season.

It’s times like these that you look back and begin to appreciate just how far the men on the 2012-13 roster brought everything that is Quinnipiac.

Rewind to the night of Tuesday, Nov. 6, 2012. Quinnipiac had lost to American International, a team that finished 12-17-6, and was faced with a 3-3-1 record of their own. Most fans probably wouldn’t have thought the team would play for the national championship on April 13.

The mantra of the team, however, never changed from the time they first began practicing. They knew they were good enough to beat anybody and they would be playing for the title more than six months later.

They then proved this to the world as they climbed the national rankings through November and December and continued to produce sellout crowds. Everyone wanted to see this Quinnipiac team play no matter the opponent.

With the wins came the media attention, as head coach Rand Pecknold and his team were hammered with daily interviews. The attendance and interview requests got to an unimaginable amount when the team was ranked No. 1 in the USCHO.com and USA Today polls for the first time ever on Feb. 11, with a record of 21-3-4. At this time, the Bobcats had rallied off 18 games in a row without a loss, which was eventually brought to a program record and longest streak by any team this season when it hit 21 on Feb. 9.

It’s times like these you remember the players who weren’t stars but stepped up in times of despair and became legends.

Take Kevin Bui for example. A fifth-year senior who will turn 26 next week was cut from the team during his sophomore season after Pecknold lost one of his scholarships due to Title IX. Bui wasn’t able to play but because of that, he still had a year of eligibility left which allowed him to play on this team and be a part of the magical run. The fourth-line forward had a few moments in the spotlight, but none more important than his double-overtime goal against Cornell in game 3 of the ECAC quarterfinals which sent his squad to Atlantic City and capped off the most historic day in the six-year history of the TD Bank Sports Center..

It’s times like these you remember yourself dressed in Bobcat gold hailing the 6-foot-4 inch All-American between the pipes.

The season senior Eric Hartzell put together was magnificent. His play in net this season not only broke records but brought happiness, cheer and a sense of security to his defense as well as fans the entire season.

Students reciprocated his efforts chanting, “Hobey Baker,” after every dive and glove-save as he guarded the 24-square foot opening, consistently keeping his team in the game.

Although Hartzell didn’t win the player of the year award, he is the first player on the team that won the most games this season to sign an NHL contract as the Pittsburgh Penguins signed the top goalie in the nation the day after his season ended.

It’s times like these you become grateful for witnessing future NHL player Matthew Peca dangle the Union defense playing the role of a magician with his stick as his wand, scoring a natural hat trick in 3 minutes and 12 seconds to advance his team to the Frozen Four.

To think the 11 seniors on the team had come this far after having a historic collapse in the second half of their freshman season helps you grasp the beauty sports bring with various types of ups and downs over a season or career.

The seniors, with the help of Pecknold and the rest of the team, made it to the national championship game within the first 10 years of the school playing in Division I. They brought a program that used to play its games in a youth hockey rink to a professional and astonishing arena and paved a legacy for the 17 other teammates, incoming freshman and teams of the future.

Before this season, Quinnipiac had only been to one NCAA tournament coming in 2002 and never won a game but look how far they’ve come.

Perhaps the most underestimated core of the team was the way that Pecknold and his players remained calm, poised and humbled the entire season even after the toughest loss of their lives. Captain Zack Currie faced the media after the loss to Yale and still had the pride and dignity that he led the team with the entire season.

Be proud, thankful and grateful for the the 28 men and their coaching staff for an unimaginable season in which they shocked the world and brought a new status of what it means to be a Bobcat.