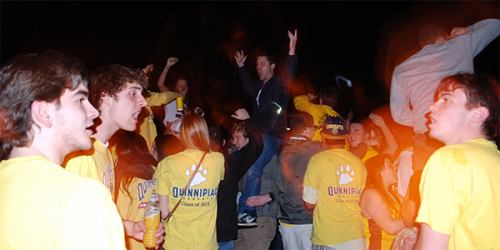 An estimated 1,500 to 1,800 students took to the Quad Saturday evening to express their disappointment with the men’s hockey team’s loss in the NCAA Frozen Four tournament, according to Chief of Public Safety David Barger. Three students and two visitors to the university were arrested and university property was vandalized, according to a press release from the Hamden Police Department. 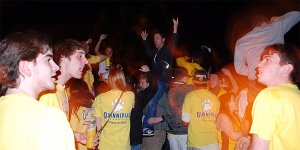 Steven Alterisio of Totowa, NJ stole money and electronic equipment from a Quinnipiac student and “head-butted” his girlfriend. He was charged with Larceny in the 6th Degree and Disorderly Conduct, the Hamden Police Department press release said.

Zachary Alvey of Caldwell, NJ was charged with Breach of Peace in the 2nd Degree after pushing a public safety officer who was trying to help the intoxicated Alvey into an ambulance, the Hamden Police Department press release said.

The five will appear in court on April 26, the press release from the Hamden Police Department said.

The students may also have to go through the university’s conduct process after investigation from the police and Public Safety, Assistant Dean of Student Affairs Seann Kalagher said.

Students had gathered at the Bobcat on Thursday night to celebrate the hockey team’s win in the semifinals game against St. Cloud State. One student was taken into custody by the Hamden Police Department for investigation after an incident with a police officer, Barger said. The student has since been released by Hamden Police.

“There is nothing wrong with celebrating,” Barger said. “As long as no one was being hurt. As long as no one was creating any great damage, clean-up is one thing, but I mean breaking windows or tipping over cars like you see on other college campuses, then we were happy just to keep it contained and let the students celebrate.”

Public Safety filmed the scene on the Quad and will be investigating who was involved with the vandalism, Barger said.

Freshman Isaiah Lee was embarrassed and upset by how his classmates acted on Saturday night.

“These students shouldn’t be allowed at university,” he said. “I think the university is doing a terrible job of dealing with this. I think they knew this was coming and they did nothing. Our school is a joke. We just lost to an ivy league institution and we just proved to them that we’re still inferior to their university.”