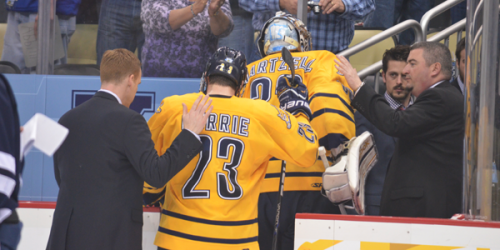 The Quinnipiac men’s ice hockey team was supposed to have a storybook ending.

A 21-game unbeaten streak, the No. 1 PairWise rating, and a trip to Pittsburgh for the Frozen Four were highlights of the 2012-13 season. 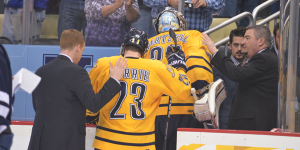 Battling a squad in the 2013 NCAA National Championship that Quinnipiac outscored 13-3 on the season, the Bobcats were unable to nail down the final victory. In front of a crowd of 18,184 at the CONSOL Energy Center, Yale blanked Quinnipiac, 4-0, winning the national title for the first time in its history.

“We’re devastated,” Quinnipiac head coach Rand Pecknold said, visibly upset. “It was a great year, and this wasn’t the way it was supposed to end. I’m proud of my guys, I really couldn’t ask for a better group.”

The win cements Yale’s spot in the record books, as the Bulldogs are the first team since 1966 to win the national championship while finishing with less than 23 overall victories.

Yale goaltender Jeff Malcolm, who started against Quinnipiac only once this year, stopped all 36 shots, a season-high for his third shutout of the season.

“Malcolm was the best player on the ice,” Pecknold said. “He won that game for them.”

“He had a great game,” captain Zack Currie said. “He showed up in his big moment, and he played extremely well when he needed to, made the saves he needed to.”

There was no score until 19:56 of the second period, when Yale lit the lamp going into the second intermission. Before tonight, a national championship game had not gone scoreless for that long since 1968.

With time ticking off the clock in the second period, Eric Hartzell attempted to clear the puck from the Quinnipiac defensive zone. Gus Young collected and set up at the left point, before putting a soft wrist shot on Hartzell. Clinton Bourbonais then stood in traffic at the left dot, deflecting Young’s shot across the crease for the one-goal lead after 40 minutes.

“It was just a fluky goal. That’s what happens when you get pucks to the net, weird bounces happen,” Hartzell said. “I didn’t really see the shot.”

Yale continued to add to its lead early in the third, seizing control of the game. Charles Orzetti skated up the far side wing, firing a shot on Hartzell. Orzetti corralled his own rebound, snapping another shot through Hartzell’s five-hole for 2-0 advantage.

Midway through the third, Yale captain Andrew Miller took notice of an unaware Quinnipiac defense. Using speed, Miller caught the defense out of position, skating onto a breakaway. Miller then wristed a shot again through Hartzell’s five-hole, padding Yale’s lead.

With 7:19 remaining in regulation, Quinnipiac decided to pull Hartzell for the extra attacker. Jesse Root followed with the dagger, grabbing the empty-netter just 21 seconds later.

“It’s very tough. I think if this was a best-of-seven series it might be different,” Hartzell said on beating a team four times in one season. “College hockey is one and you’re done and they were the better team tonight.”

Malcolm came up with two stops on Quinnipiac breakaways early in the second. Matthew Peca crossed over Gus Young in the offensive zone, only to be stuffed by Malcolm’s left pad. Later, Malcolm stoned Samuels-Thomas with his right shoulder when the junior was in alone.

“I think we could have got more pucks to the net. He had a great game,” Peca said on Malcolm’s play. “That’s just the way it goes. They got bounces for their goals and we didn’t.”

“I think we were the best team in college hockey, and unfortunately we didn’t prove it tonight,” Pecknold said. “You’ve got to give Yale credit for that.”