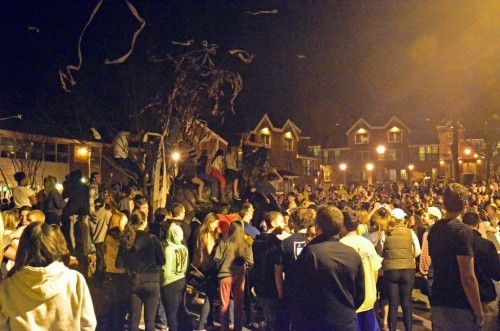 Between 800 to 1,000 students gathered around the Bobcat statue on the Mount Carmel Campus last night into this morning to celebrate after the men’s ice hockey team moved on to the championship game of the NCAA Frozen Four tournament, according to Chief of Public Safety David Barger. Eight Hamden police officers and 14 Public Safety officers were called to monitor the students. 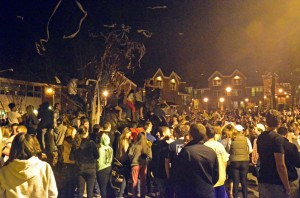 During the celebration, a student threw a smoke bomb where students had congregated.

“On some of the social sites they are saying that Hamden P.D. released a smoke bomb to disperse the crowd and there is nothing further from the truth,” Barger said. “A student actually threw a smoke bomb into the crowd, which was a foolish thing to do as far as creating a little bit of a panic.”

Freshman Nicholas D’alessandro got hit in the chest with this smoke bomb.

“[The smoke bomb] dropped right there and blew in my face,” he said. “I am okay but it was kind of screwed up because I didn’t do anything. I was just standing here chanting, ‘Go Bobcats’ and I got hit in the chest. It actually got me energetic. I was chanting even louder.”

Freshman Rebecca Maioriello was very excited about the hockey team’s win as well.

“I am so filled with school spirit right now,” she said. “Especially because I am a freshman and to have this happen my freshman year, it just makes me love Quinnipiac more.”

The Hamden police and Public Safety allowed students to express their school spirit.

“There is nothing wrong with celebrating,” Barger said. “As long as no one was being hurt. As long as no one was creating any great damage, clean-up is one thing, but I mean breaking windows or tipping over cars like you see on other college campuses, then we were happy just to keep it contained and let the students celebrate.”

Barger expects that there will be an even larger celebration Saturday night, but he says Public Safety is prepared.

The university will have 38 Public Safety Officers, 26 Hamden Police Officers, a fire crew of four to six firemen, four EMTs, a registered nurse and two ambulances, one on the Mount Carmel Campus and another on the York Hill Campus, according to Associate Vice President for Public Relations John Morgan.

New Haven Shuttle service will not run tomorrow night for public safety reasons, according to Morgan.

Quinnipiac University’s Public Safety Department and Yale University including New Haven Police Department are communicating on the same page for the safety of the students, Morgan said.

“It’s an exciting weekend for the university, something we’ve been waiting for, we are very excited for this great opportunity, we just want to make it safe and secure for everyone,” Morgan said.