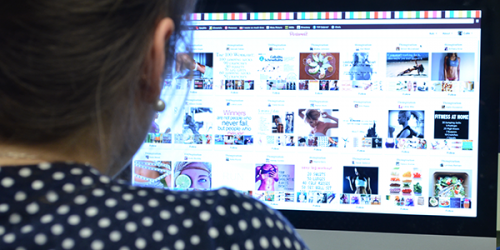 Has Pinterest told you to get to the gym today? Has your Facebook newsfeed been flooded with images of inspirational quotes accompanied by a six-packed torso?  It appears social media is inspiring the world to be fit, and to work towards our best body. How nice of them! 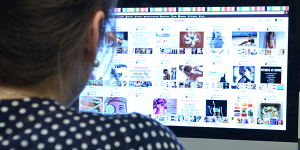 But these seemingly empowering images, known as fitspiration, derive from something completely opposite.

Defined by Urban Dictionary, fitspiration is “a healthier alternative to thinspiration using examples of good fitness as inspiration to attain a fitness goal.” This makes sense until we understand the definition of thinspiration, which is “usually in the form of a picture in which “ana” or anorexic people look to gain inspiration to continue starving themselves.”

This is where the media becomes manipulating. The connotation of thinspiration is deemed negative, known to promote a dangerous level of thin, and damage self-esteems. By putting a sports bra on super skinny models, the message is transformed into one of confidence and strength, not starvation.

“I wish that’s what people would see,” said Tami Reilly, associate athletic director for the Fitness Center. “I think when someone sees ‘fitspiration,’ the first thing a college girl is going to think of is being thin.”

Reilly, a former women’s fitness club manager, explained that true fitspiration combines a healthy diet, an active lifestyle, along with a sound mind and spirit regardless of size and weight.

However, our Tumblrs tell us something else. By promoting glamorous models in the gym with muscular arms, sculpted waistlines and next to no body fat, it’s difficult to see the difference between thin and fit.

For some young women, there may never be a separation between the two. “Fitspo” and “Thinspo” will forever have the same message of “thin is in,” in some minds. But for Kylie Stanger, a sophomore at Quinnipiac, the distinction has become clear through her firsthand fitness experience.

“I used to be that person that wanted to be thin, like so super skinny,” she said.

Stanger would work out everyday twice a day and has lost a significant amount of weight since she started the regimen her freshmen year.

Stanger admitted to looking at fitspiration type pictures on social media frequently, but she uses the motivational messages constructively.

“To me to see those quotes like ‘push yourself,’ can help you seriously push yourself that extra mile when you’re running on the treadmill,” she said.

At the same time, Stanger can’t help but be envious of the abs on a Nike woman model.

According to DoSomething.org, the nation’s largest nonprofit for young people and social change, only 5 percent of Americans look like the models portrayed in the media, and 91 percent of women are unhappy with their bodies. This only proves how unattainable a Victoria’s Secret Angel’s body really is, but we’re still striving for it.

Flipping through magazine ads and scrolling through social media sites reveal cases where the skinny versus healthy message is obvious. But more recently the line has been blurred. It’s as if the media is disguising their models in gym clothes convincing the public that they’re working hard for their figures.

But in reality, it’s the computer touch-ups that work twice as hard to cover up the negative connotation.

“I don’t know if it’s about being thin or being fit, it’s still telling you that you’re flawed the way you are,” said Erin Sabato, director of programs with the Albert Schweitzer Institute. “It’s still going to tell someone they need to work harder or what they are is not acceptable by whoever’s standards.”

Sabato also teaches a class about gender roles in the media. She believes that “fitspiration” is creating a new normal among young women. Not only do they have to be thin, they have to workout and look hot doing it.

Recently, our self-scrutiny and body expectations have become even more disturbing. Reminiscent of the infamous “Mean Girls” scene where The Plastics could only see their “bad” features in the mirror, the body ailment to complain about today is the thigh gap. A physical trait every girl from their teens to their twenties is trying to achieve.

Starting with a Good Morning America segment that featured this new craze two weeks ago, it has become the new investigation of the Internet. Today, typing “thigh gap” into Google brings up a full page of news stories, with interviews of high school girls and the gap they’re trying to acquire between their legs.

“That was something I never thought of before,” Stanger said. “I never thought that was a thing, I mean my legs touch but that doesn’t make me think, ‘Oh my God, I’m fat.’”

She accepts the fact that her thighs touch because her muscular legs from running three times a week prevent the ‘gap.’

“I think we need to get in a better place where we’re okay with who we are,” Reilly said. “Looking model stick skinny is not the answer to everything.”

In the April edition of Cosmopolitan magazine, an article entitled “Your Thinspiration Can Actually Make You Fat!” showcased an experiment where women kept food logs to monitor their diets. Each log had an image of an averaged-sized woman, a thin woman or no women at all. The group exposed to the “skinny pics” were more likely to eat unhealthy because the pictures were the opposite of motivation. They were frustrating and discouraged the women from eating healthy.

The “let me show off my six-pack” type pictures can also cause women to set unrealistic, short-term goals for themselves at all costs regardless of their body type or ability.

It’s become common knowledge that advertising is manipulative, and the media proposing unrealistic body images is nothing new. Despite its negative impact on women’s self-esteem, these models continue to be idolized.

“Even though we know that advertising is not realistic it still has an effect on how we feel about ourselves,” Sabato said. “We can know cognitively that this is not true and this is a fantasy, but in the end, ‘I still don’t look like that.’”

Sabato and Reilly both mentioned that seeing a woman 8-10 pounds overweight running, or an average sized person working hard in the gym is more motivational than any “fitspo” a pinterest board can offer.

“Fitspiration is the regular person struggling and sweating and choosing to eat a salad with chicken,” Reilly said, explaining that the only way fit can be perceived in the media is with a glamourous airbrushed model holding a weight.

And through Stanger’s journey from her skinny-obsessed to her healthy balanced lifestyle, she has learned to put these images in perspective.

Want to see it for yourself? Check out these links of typical fitspiration and thinspiration blogs.