Bobcats gear up for Frozen Four 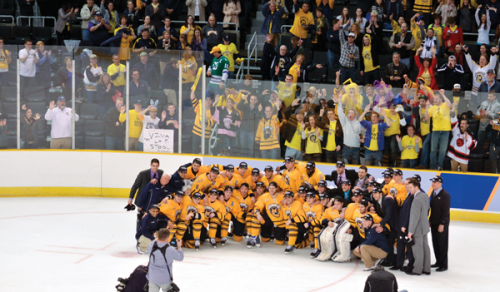 All year long the motive in the locker room has been the same. Since day one, the Quinnipiac men’s ice hockey team has believed they are good enough to win a national championship and won’t be happy until they do so.

Even after rattling off 21 games without a loss, a regular season conference title and numerous individual accolades, the goal has not changed.

“If you win your last game, you’ve won the whole thing,” senior captain Zack Currie said before the start of the season. “There’s no reason for us to lose to anybody this year. We’re good enough to say that. So unless we win that last game I won’t be satisfied.”

Although the team has lost seven games on its way to the Frozen Four, Currie and the team are just two wins away from being satisfied.

On Thursday, April 11, the men’s ice hockey team will travel to Pittsburgh, Pa., where it will take on an unfamiliar opponent in St. Cloud State, a school with more than 15,000 students in St. Cloud, MN., where hockey is king of all sports. The game will be the second semifinal on Thursday and will be played at 8 p.m. on ESPN 2.

“We’re extremely proud of our players and how hard they’ve competed throughout the season and very excited to move on to the Frozen Four,” Quinnipiac head coach Rand Pecknold said in a teleconference last week. “It’s a great accomplishment. And we’re looking forward to competing against St. Cloud.”

If Quinnipiac defeats St. Cloud in the national semifinals, they will face the winner of No. 1-seeded UMass-Lowell and No. 4-seeded Yale, who play at 4:30 p.m. on Thursday. The championship game will be played on Saturday at 7 p.m., and will also be on ESPN 2.

Although the Bobcats could face ECAC foe Yale for a fourth time this season in the national championship game, as always, the Bobcats aren’t looking past the next opponent and all focus is on the Huskies.
[media-credit name=”Anna Brundage” align=”alignright” width=”300″] 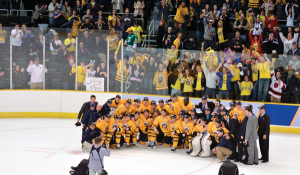 [/media-credit]
“I’ll tell you what: I’ll be happy to play either one on Saturday,” Pecknold said. “But we’ll have our hands full with St. Cloud. You could have picked any three teams in the country, we’d be happy to be there.”

St. Cloud State senior forward and Hobey Hat Trick finalist Drew LeBlanc will be the toughest challenge on Thursday for the Bobcats. LeBlanc has 13 goals and 37 assists for 50 points on the year for the Huskies which puts him in seventh place in the nation in scoring. LeBlanc is a fifth-year senior who decided to come back for another year rather than make the jump to the NHL which his coach, Bob Motzko, said that he had received offers as early as his junior season.

“I think he had the feeling that he had unfinished business and he wanted to come back and do it the right way,” Motzko said.

LeBlanc isn’t the only one who Quinnipiac will have to watch carefully on the offensive end. Junior Nic Dowd has 39 points on the year and freshman Jonny Brodzinski has 33 points thanks to a team-high 22 goals.

St. Cloud has six different players with at least 31 points. The Bobcats highest scorers are Matthew Peca and Jeremy Langlois who both have 30.

As one may figure, St. Cloud has a high-powered offense that averages 3.41 goals per game, which is second to No. 2 Minnesota, which lost to Yale in the first round. In addition, the team has scored four or more goals in 20 of 29 games this season, something the Bobcats did just 13 times.

The Bobcats counter this number, however, with the nation’s top defense, surrendering just 1.63 goals per game.

“Yeah, it’s clear we’re the No. 1 defensive team in the country,” Pecknold added. “It’s a team game. Hartzy [Eric Hartzell] is our stud, but we certainly play well in front of him.”

Also helping to support that low goals allowed number is the No. 1 power play, stopping 90.6 percent of team’s chances this season.

Another important factor to watch this weekend is senior leadership. Although this is the first Frozen Four for Quinnipiac, it has 11 seniors on its roster, which is as many as the other three schools combined. In addition, the remaining three schools have only combined to reach one Frozen Four, coming from Yale in 1952, making the experience a new one to all.

On this biggest stage, the Bobcats will play in front of the biggest crowd in their life. The Console Energy Center, which is home to the Pittsburgh Penguins, holds more than 18,000 fans, which is more than five times as many as the High Point Solutions Arena at TD Bank Sports Center. The seniors will need to bring their composure and set tempo in front of Hartzell.

“It certainly will be the biggest crowd, I’m sure,” Currie said. “But I guess the challenge in that is just making sure we stay grounded and that we don’t let ourselves get caught up in it. We’ve done a really good job all year as a team focusing on what we can control and taking every game in stride.”

Although it’s not the focus of the team, Quinnipiac has another opportunity for history this weekend as Hartzell is one of three Hat Trick finalists for the Hobey Baker Award, which is essentially the Heisman award of college hockey. If Hartzell wins, he will be the first Bobcat to do so and only the third goalie to ever win the award, following in the footsteps of Ryan Miller of the Buffalo Sabres.

“I think Eric Hartzell is the best player in college hockey,” Pecknold said. “Dominant all year. Certainly there’s a lot of great players. Drew LeBlanc at St. Cloud, [Austin] Czarnik at Miami, and on and on. But I just think from a standpoint of what Hartzell does for us, my leading scorer is 99th in the country in scoring, and yet we’re ranked No. 1 in the country.”

Though the season has been a long one, with the first game dating back to more than six months ago on Oct. 6, 2012, Pecknold said that the players haven’t become any less competitive.

“To me, probably the main reason we’ve been good this year is our practice habits,” Pecknold said. “Like the kids just come, it’s a war every day in practice. They compete. They battle. And I just — I expect us to be good when we get there. And I don’t really need to do anything different.”