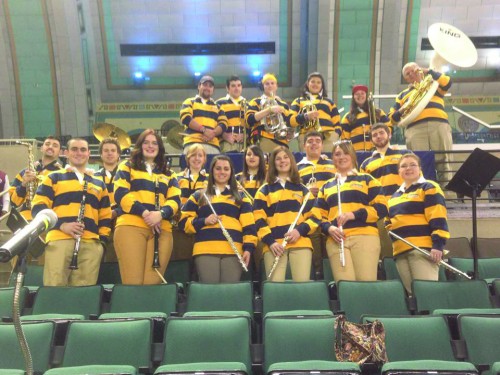 Following this weekend, one team will have traveled more than 1,600 miles in a span of three weeks. It’s not the women’s basketball team or even the men’s ice hockey team.

Rather, it’s the Quinnipiac pep band, who has carried the Bobcat spirit out of the TD Bank Sports Center and across the Northeast.

Senior and president of the pep band Miranda Davis, said it has been a rewarding experience, especially being able to see the hockey team play as she grew up watching the sport with her dad.

She, with the help of fellow senior Matt Porell, helped not only represent her school with the brass instruments, but the U.S. as well. 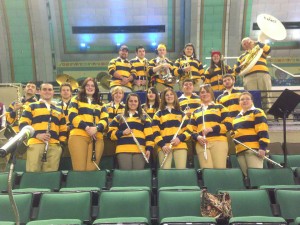 [/media-credit]
“It’s really something, to play the national anthem for a crowd that is going to be on national TV,” said Porell, who plays the euphonium for the band. “I think the Maryland game was the coolest, especially because we were in Maryland, playing Maryland and we got to play it.”

Although the pep band doesn’t get much recognition from students, it isn’t letting that downplay how special this year has been. Before the band played in Maryland, Porell had his name announced over the arena speakers as he led the band in playing the national anthem.

“It was actually a really big shock because I don’t do anything behind the scenes during the games,” Porell said. “I just call the songs out and count everything off.”

Davis has also had her name announced in some of the recent postseason games for the men’s ice hockey team.

“It’s heartwarming too because all the work we put in behind the scenes, with athletics and stuff like that, not being able to get the recognition from other people, so when they say it over the loudspeaker, it’s like I’m finally getting the recognition from something,” Davis said.

Despite Eric Hartzell and co. creating the majority of the headlines for the school, Porell and Davis agreed the women’s basketball Northeast Conference tournament championship has been the highlight of the year for them so far.

“Watching the fans storm the court was one of the best things I’ve ever seen,” Porell said.
“I was jealous we couldn’t get on the court with them,” Davis added.

Porell was at TD Bank Sports Center on March 10, 2010, as a freshman when the men’s basketball team lost in the final seconds in the NEC tournament championship game, which, prior to this season, was the closest either basketball team had been to making it to the big dance.

“That just stunk because we lost by two points,” Porell said with a look of disappointment.

The women’s basketball team, however, erased the bad taste of that game and allowed the pep band to play on an even bigger stage as well.

“Playing in that arena in Maryland was just a different experience, there were four levels [of] seats and then getting texts from people saying, ‘I saw you on national TV.’ I blog for admitted students stuff and I keep on writing things for them saying this was the greatest weekend of sports history I’ve ever been to and I’ve said that for, like, three straight weekends,” Porell said.

To be able to perform on such large stages, the band must be committed which is a difficult task for full-time students.

The group is made up of 30 students and only has time to practice at the arena once per week for an hour.

“Every weekend we had to put in every Friday, every Saturday at least, and then some weekends, Sundays too,” said Davis, a flute player. “So that’s three days we are giving up. We normally have at least 12 people there, if not more. So there’s some weekends when we have the full group and other weekends when maybe midterms are about to happen and we get a little lower on our numbers but it was always at least 12 so we were able to play every song. We never once had to cancel because we didn’t have enough people who were interested.”

The dedication has gotten them one more opportunity, this one coming on what possibly will be the biggest audience of their lives in front of more than 18,000 fans in a sold out crowd at the Frozen Four.

“Frozen Four, that’s like the big shots and we’re playing the national anthem,” Porell said. “We have a lot of alumni coming back wanting to play with us, which is always fun. All four schools are bringing their bands so that will be interesting. It’s always nice to see what other schools do especially, you know, other schools that don’t have football programs or don’t march because that is the main thing with us.”