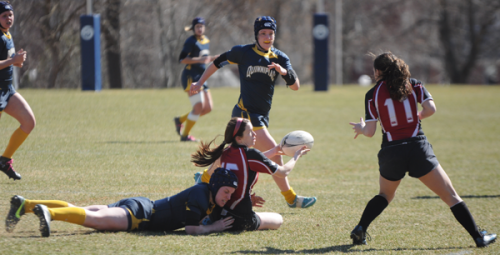 In the past six months, athletics has brought Quinnipiac’s name to the national spotlight.

From Nov. 9, 2012 to Feb. 15, 2013, the men’s ice hockey team went 21 games in a row without being beaten, soaring to the top of the national rankings, causing a stampede of media attention to the top of York Hill. Even after the loss on Feb. 15 to St. Lawrence, the team hasn’t had a chance to hide in the shadow of the Sleeping Giant and will have its biggest test this weekend at the Frozen Four.

Now, in April, a team that isn’t made up of players who were recruited from around the world and offered full-rides to play their sport is playing under a bigger spotlight. These players were star athletes in high school and wanted to play at the Division I level but came to Quinnipiac with no team to play on.
[media-credit name=”Matt Eisenberg” align=”alignright” width=”300″] 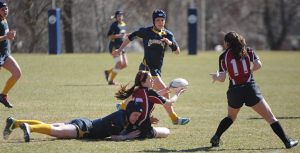 [/media-credit]
In the spring of 2010, 60 females were asked if they would like to be part of a Quinnipiac women’s rugby team, a team that would be tied to and funded by the school.
Two years later, those 60 girls are down to a select group of 13 seniors and juniors who stuck with the team. They were brought together by head coach Becky Carlson who then recruited an additional 10 sophomores and freshmen once the program was official.

They have made a big push for the sport of women’s rugby as they are just one of three NCAA Division I programs in the country.

On Saturday, April 13, the team will play its biggest game to date as it travels to Annapolis, Md. in the National Round of 16 in the 2013 Emirates Airlines USA Rugby Women’s Collegiate playoffs to face Lee University at 11 a.m.

“I think this has really hit home for them and our seniors because we started out as a program with simply walk ons,” Carlson said. “We started out with 60 kids and we have 12 kids that stuck it out and these are the core of our kids. We have new kids who came in but this is a big deal for them.”

The Bobcats were entered into the national tournament after an unbeaten campaign in the fall in which they went 11-0 and also won the Tri-State tournament championship.

One of the key additions to the group of upperclassmen walkons is freshman Natalie Kosko. Kosko led the team with 17 tries in the fall as she seemed to effortlessly run through defenders in every game. Kosko uses an arsenal of moves you’d see in the NFL to barrel her way down the field from jukes to spin moves and even stiff arms.

“It gets me really amped up,” Kosko said. “You know, stiff-arm is my favorite and that’s what I love to do. If I see a girl coming at me with her face right there, you know, that’s how it happens.”

This winter, Kosko competed with the USA women’s rugby national team where she continued to improve her game.

“I think just by looking at Natalie, you can tell she is an Olympic athlete,” Carlson said. “She has contributed a lot to the program.”

Kosko helped the team advance to the next round as she scored three tries against Temple on Saturday, April 6, in a 44-0 win.

“It feels definitely awesome to have, you know, all your teammates, your fans, supporting you, your friends being able to come and your whole school watching you,” Kosko added.

Senior captain Colleen Doherty was a three-sport athlete in high school but never played rugby until she began training with the team her sophomore year. Doherty is ecstatic with the decision she made to try out the sport two years ago.

“It is so surreal,” Doherty said. “It is an amazing decision and I’m so glad that the school decided to add this program. I think that as a program, we have represented Quinnipiac really well and we just want to keep moving forward and keep doing awesome as a team.”

Much like the men’s ice hockey team, the women’s rugby team has a legitimate shot at the national championship. If it makes it to the semifinals, the team will fly out to Stanford, CA., and play in the biggest stage in just the second year of the program.