Freshman jolts into the leadoff spot 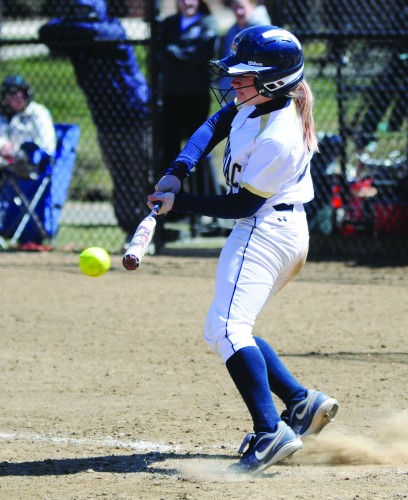 “To be honest, I wasn’t that good in junior high; I wasn’t very good at hitting, at all.”

My, how things have changed.

With a batting average of .351, freshman softball player Courtney Solt has started off her collegiate career hot. With a team-leading 39 hits, a bright career has emerged at the top of the Quinnipiac softball team’s lineup.

As the story usually goes, she began playing as a child at the age of 7. Her father was the catalyst in her development.
[media-credit name=”Matt Eisenberg” align=”alignright” width=”245″] 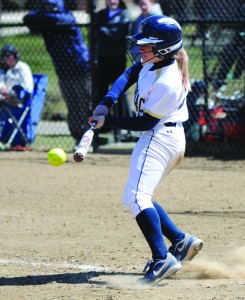 [/media-credit]
Along with lessons, she vividly remembered the Derek Jeter Hurricane her father bought her. The contraption, when hit, would spin around a certain number of times depending on how well you hit it. As the machine stopped, it would spin back around at the same speed. Solt credits the Hurricane with helping her with hitting ability and timing.

Softball became an important part of Solt’s childhood, and in middle school she was beginning to take it seriously.

“I was in junior high when I started taking it seriously,” Solt said. “I always had this big thing in my head saying I really want to play Division I softball.”

Playing in high school proved ineffective for the heights Solt was aspiring for. After her sophomore season at Boyertown High School, she quit playing and joined a club team. There, her skills and potential would be noticed.

“When I joined my club team that is when I really got serious,” Solt said. “That was like ‘you have to go Division I in order to play for this team.’”

As a member of Pennsylvania’s Tuff N’ Tuffer Gold club team, she accepted the challenge and hit an unbelievable average of .550 while collecting 42 runs, 18 RBIs, 14 doubles, nine triples and 36 stolen bases in the summer of 2011.

Quinnipiac head coach Germaine Fairchild first saw her on offense when she began scouting Solt. Later, she would notice her versatility as a fielder.

“The very first impression I had was seeing her run to first base,” Fairchild said. “So, my first impression was her speed. After, I saw she was a player whose coach had put her all over the field. That tells you that you have a well prepared kid for this level.”

Evidently, Solt was prepared for the transition to college play. Leading her team in hits and runs scored and earning top spots in other statistical categories, Solt still identifies a key difference in the game.

“It’s faster,” Solt said. “We [the club team] went to Go Nationals in Oklahoma City and we played against girls that are going for Texas A&M and Alabama. I learned if I could play with those girls I could probably play here.”

Both players and coaches pay close attention to strikeouts, but for different reasons. Fairchild sees her three strikeouts as highly impressive considering the transition. Solt views the situation differently.

The stats reveal Solt has solidified her spot on the roster, as Fairchild told her star prospect she would have to do.

“I kept telling her throughout the fall that she was the best leadoff batter that we had,” Fairchild said. “But given the older players on her team, it was her job to come out and prove that.”

That, she has most certainly proved. Statistics, however, are not her main concern.

“I want to be a leader,” Solt said. “I don’t want to be part of the shadow. I’d rather be the one that’s leading, not just in stats, but leading the team and helping as best I can.”