Co-captains leave their mark on the court 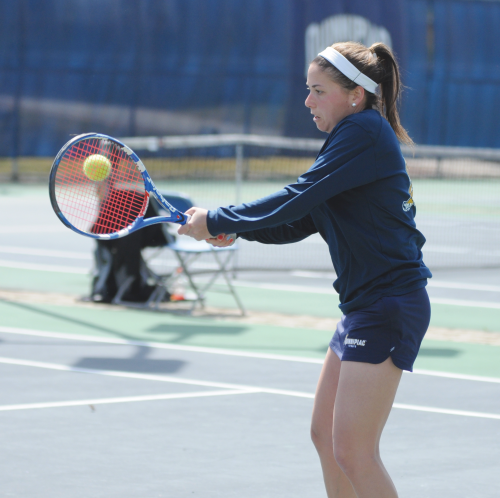 No publicity. No locker rooms. No respect.

But what they do have are championships.

In terms of hardware, the Quinnipiac women’s tennis team has the second most of any team on campus, having captured six NEC titles since 2004. The most recent of those came in 2011 when it advanced to play UCLA in the NCAA tournament.

It’s quite the track record, but there is no glamour to it. The locker rooms are actually the bleachers next to the tennis courts on the Mount Carmel campus. If the team wants to hit in the winter, it moves a pick-up basketball game in the recreation center.
[media-credit name=”Matt Eisenberg” align=”alignright” width=”300″] 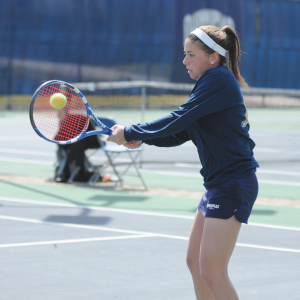 [/media-credit]
But, it’s tennis. And the players understand the realities of it.

“We’re not overlooked, we’re just not looked at,” said Rachel Cantor, a co-captain, when asked if she thought the team is awarded the respect it deserves. “The tennis program here has the most championships. We get that we’re not a huge spectator sport and we don’t bring in revenue, which could be the reason we aren’t treated like other teams, but we don’t let it affect us. We work with what we have and we do a good job of it.”

The other co-captain, Sarah Viebrock, knows the team doesn’t draw attention but doesn’t let it weigh her down.

“Tennis isn’t a big spectator sport, so you can’t really expect to have huge fans,” said Viebrock. “We don’t have a locker room. We never have. We’re the only team on campus that doesn’t. So that type of stuff is annoying but it’s not something that’s ruined my experience here.”

Quinnipiac tennis may not have the greatest amenities but that hasn’t slowed them down. They continue to go about their way, silently winning.

This year’s women’s team is focused on bringing head coach Mike Quitko one last NEC title before Quinnipiac moves conferences and heads to the MAAC next year.

“I’m not leaving here this year without getting ‘Q’ one last NEC championship,” Cantor said. “I’ve never seen such a talented team in all four years. We have talent and we have the team chemistry to win it. We all get along so well. It’s kind of like a family in that we can all depend on each other. All we can ask is that the girls leave it all on the court.”

Quitko isn’t ready to anoint them NEC champs just yet but he does believe that they have the necessary blend of chemistry, talent and leadership to get there.

“If they can win the conference, I’ll be ready to call them top five in my 22 years,” said Quitko on how the talent on this team stacks up against the others in his coaching career. “Definitely, maybe even more.”

That’s high praise from a coach who has had six women’s teams play in the NCAA tournament.

The start to the season hasn’t been phenomenal at 7-7, but it’s better than last year’s record at this time, and they finished last season two points shy of winning back-to-back NEC titles.

“We started off much stronger this season than we did last season and we have a lot of the same starters, so I think we started off stronger than I expected,” Viebrock said.

The one team that stands in their way for that last NEC crown is Fairleigh Dickinson University. The team that defeated them in the NEC championship game a year ago. They have their sights set on another match-up with them in the NEC tournament and have been more successful against them this year than they were last.

“We lost to FDU, 4-3, on Saturday (Mar. 30) but last year we lost 7-0 in season and then lost in a tight 4-2 match in the NEC finals,” Cantor said. “But we all proved in the NEC’s that everyone wanted to win. I’ve never seen these girls fight as hard as they did last year.”

The team’s annual preseason trip to Florida also gave the girls the confidence to believe they can alter the way recent history has unfolded between the two schools.
“Florida helped prove to the team that we could easily beat FDU,” Cantor said. “We just couldn’t clinch it last Saturday.”

“In tennis you never know who is going to win regardless of what the score in the match is,” Viebrock said on what was needed to reach the team’s goal of an NEC Championship. “It can go either way, so the biggest thing we try to talk about with everybody is fighting, not giving up and leaving it on the court. And so far these girls have done that every single match.”

They have four regular season games remaining before the NEC tournament, which begins on April 19.

Until then, expect more of the same from the Quinnipiac women’s tennis team. The players are going to keep battling. They’re used to it at this point.