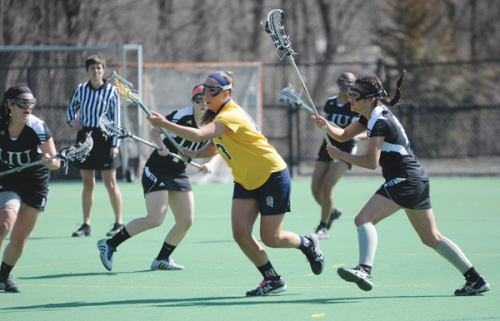 When Sarah Allen first arrived at Quinnipiac she was known as both a great passer and a great scorer. Netting a combined 116 goals and dishing out 85 assists and in her junior and senior seasons at Glastonbury High School, Allen was the all-around talent that women’s lacrosse head coach Danie Caro wanted.

Caro knew, however, that Allen would have to adjust her game in order to fit into the overall team system.

“Recruiting Sarah out of high school, she had a really good shot and was a very good goal scorer,” Caro said. “When she got here we had to tell her she was forcing it a bit. Sarah, of course, took our advice and became an elite passer.”

Elite would be one way to describe it, record setting would be another.
[media-credit name=”Matt Eisenberg” align=”alignright” width=”300″] 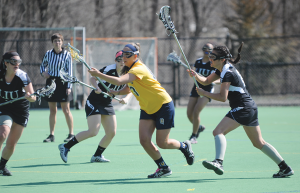 [/media-credit]
In her junior campaign with the Bobcats last season, she had 64 assists in only 15 games. At 4.27 assists-per-game she led the nation and set the NCAA Division I record. The prior record was 4.17 assists-per-game, which was set by Brown University’s Lauren Becker in 1986.

“I try not to think about records, honestly,” Allen said. “I just think about winning in the heat of the moment, and doing what I can to best help my team. Last year, that was more setting other people up.”

This year is an entirely different story.

In only 12 games so far, Allen has developed the scoring touch that Caro knew she was capable of. While her excellent level of passing remains a constant, 30 assists so far, she has added 15 goals for Quinnipiac.

“We’re very pleased with her effort to change her game,” Caro said. “She really puts in the effort.”

“Our offense has changed a lot this year, it’s more diverse,” Allen said. “I can pass because we have good cutters, but there is more room for me to score as well.”

Allen has also taken on another special responsibility within the team this year. Due to her success and hard work she has become a leader and a mentor for the younger players to look up to.

“She leads by example,” Caro said. “She has a great work ethic, she pushes herself, and she knows that she needs to work hard.”

Perhaps opportunity to score more has to do with the fact that Allen has been forced to become a centerpiece of Quinnipiac’s offense. Because of her experience, she is able to get her teammates settled and run the system that was designed.

“There are not many offensive possessions where the ball isn’t in Sarah’s stick at some point,” Caro said. “For her to be able to get everyone on the same page and quarterback our offense is huge.”

She may not be setting a new assist mark this season, but the senior attacker knows that her ability to adapt to the team’s necessities is key. Still, she remains unselfish when talking about how she has made the recent transformation into more of a goal-scorer.

“My teammates make that possible,” she said. “We all support one another, and that makes it easy to play as a unit.”

“If you ask Sarah, she’ll tell you she doesn’t care about the stats,” Caro said. “She cares about the team success. She does what the team needs from her, and that says a lot about her as a person.”

Quinnipiac has started off the season at 5-7 overall and 3-2 in the Northeast Conference. It has recently gotten back to its winning ways, however, with a 20-11 victory over conference foe LIU Brooklyn. Allen finished with a career-record nine points in the victory, with four goals and five assists.

Then on Sunday, Allen made history in Quinnipiac’s 13-7 win over Wagner.

After scoring midway through the second half, Allen tied the Quinnipiac all-time scoring record of 175 points. Later in the game, Allen moved into sole possession of first place, picking up an assist with four minutes left. The career total of 176 points propels her over Katie Latonick class of 2010.

Heading into the end of their season, both Allen and Caro know that they must continue to grow as a team in order to reach their ultimate goal.

“We need to focus on showing up for the entire game,” Allen said. “If we start playing for all 60 minutes, and have faith and confidence in one another, we’ll be okay.”

Caro said that the team needs to play the style it wishes to for the team to make it far in the conference playoffs.

For Allen individually, perhaps the biggest way she can do that is by continuing to be the selfless and effective player she has always been.

“When she arrived here, she was known as a goal-scorer,” Caro said. “After she started playing, she was labeled as the feeder. Now I don’t know what they call her because she can do either with equal ability.”