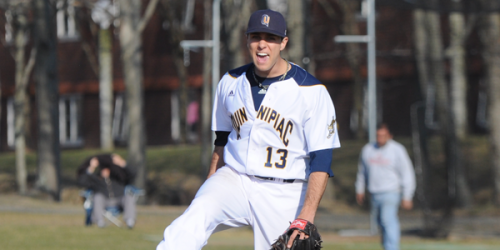 The Quinnipiac baseball team made the most of the nice weather on Friday by earning the first win in its series against Sacred Heart, 4-1. Quinnipiac pitcher Derek Lamacchia was great and a key factor in the win

“I thought he was outstanding,” Quinnipiac head coach Dan Gooley said. “Lamacchia has dedicated himself to making himself the very best he can possibly be.” 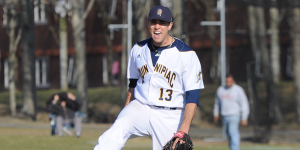 While the team only hit .154, four of 26, team captain Chris Migani led the charge in batting going two for three with a double and two RBIs.

“I’m just doing what I’m supposed to do,” said the captain. “Go out there and play your heart out. Live for today. Play for today.”

Migani’s bat served him best in the fifth and sixth innings. Freshman Mike Palladino set up the opportunity with a double to left field. Teammate Steffen Herter laid down a perfect bunt to advance Palladino and place himself on first. Pioneer pitcher Troy Scribner walked Bobcat Mike Blumenthal to load the bases. Migani delivered the hit of the game with a two run single.

The team up 4-1 in the top of the eighth inning, Lamacchia found himself in a jam with the bases loaded. Billy McDonough of Sacred Heart hit a single to start the inning. Lamacchia walked John Murphy to put runners on first and second. The next at bat, Pioneer Dan Perez hit the ball up the middle, but not far enough to run his teammate home.

“He made some big pitches today, especially in the eighth inning,” said Gooley. He reached a little deeper inside his heart and turned around and got out of it.”

“It’s the will to compete,” Lamacchia said. “I knew I was in a tough spot there. I knew that I had to be mentally strong and really bare down in order to get out of that.”

Summoning this will, the Bobcat pitcher proceeded to strike out Dave Boisture. Afterword, fellow Pioneer Brian Lamboy grounded into a double play. It was the highlight moment of the game.

Quinnipiac’s game plan for the rest of the series is simple: stay hungry

“It’s always good to get that first one, but new game,” said Migani. “Today is over. Focus on tomorrow. Come out firing again.”