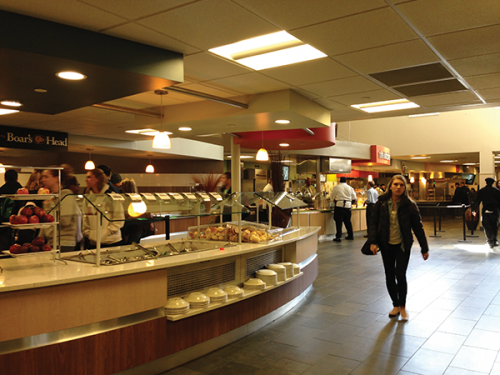 Mount Carmel’s Cafe Q is open until 9 p.m. during the week right? Right. Knowing this, students should be able to purchase food until this time at night. Good luck trying to find anything good after 7 p.m., though. For some reason Chartwells employees begin cleaning up their stations outrageously early, leaving students who want or have to eat late with a lack of options. It’s leftover salad bar or dried up chicken tenders for you!

Quinnipiac’s “Dine on Campus” website lists Cafe Q hours from 7:15 a.m. to 9 p.m. Monday through Thursday, and until 7 p.m. Friday through Sunday. Clearing out every station so early is not only false advertising, but a real disadvantage for students who suffer from food allergies or dietary restrictions. The lack of choices might also force students to eat unhealthier than they would like to. There’s already a lack of variety and amount of choices when all stations are open, why are they make it worse?

The hours are more inconvenient on the weekends. They close at 7 p.m., which is way too early. Chartwells and the university need to realize that students have different schedules and eat at different times, typically later than 7 p.m. The least they could do is keep everything open until their advertised closing time.