The shifting landscape of television in the 21st century 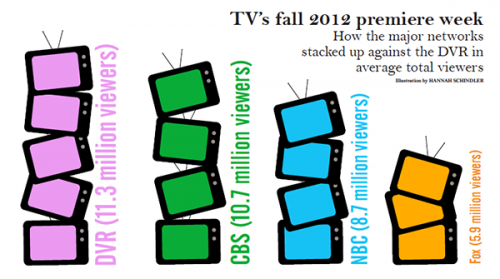 “Okay how ’bout this: a single white girl in the city working at a magazine,” proposed an NBC executive during season 2 episode 9 of Fox’s hit television series, “Family Guy.” “Will you guys hear yourselves? This is the same old stuff over and over again,” said the executive next to him.

This seems to be a trend in television series today; unoriginal shows or spin-offs with repetitive and seemingly desperate comedic attempts. It was seven years ago that “Friends” came to end, and 15 since Seinfeld filmed a new episode. Both series captured a generation, along with more than 52 million and 76 million viewers respectively. Today’s TV shows don’t come close to those numbers. The most watched show of the 2011-2012 season was CBS’s “NCIS,” which grabbed the attention of 19.5 million.

It appears there isn’t one classic sitcom everyone’s watching today. This could be due to current writer’s inability to produce original content that appeals to the masses, or perhaps it’s the shifting landscape of how our generation consumes their entertainment.

“It’s a sudden stop for the period that begins with Seinfeld and runs to the end of 30 Rock and the Office,” said Rob Sheffield, a writer for Rolling Stone Magazine, in his article “Are Sitcoms Dying?” in the February 2013 issue. According to Sheffield, talking about last season’s shows is similar to “strolling through a Confederate graveyard. Some are officially dead; others are still walkers.”

Though there’s been some consistent hits, such as “The Big Bang Theory” and “How I Met Your Mother” that’ve topped the charts for months, there’s also a slew of failed series and those that are slowly losing their appeal. This includes ABC’s hit series “Modern Family,” whose ratings fell to it’s lowest last year. When DVR ratings were taken in account, however, it spiked back up.

Many feel like shows are becoming repetitive and creativity is waning. This affects a show’s ability to capture a wide audience like sitcoms have in the past.

“I don’t find myself spending anytime watching TV when I’m at school,” said freshman Ashley O’Neill. “Either shows are too time consuming to follow, they have a repeating plot or they are too depressing.”

Phillip Cunningham, a visiting assistant professor of media studies teaching a course specifically in sitcom history next semester said he thinks we are going through a pattern very much like the 1980s.

The 1970s revolutionized the sitcom, specifically with famous producer Norman Lear creating many popular shows such as “Good Times,” “All in the Family” and “Three’s Company,” which left the 1980s in a comedic stand-still, Cunningham said.

“It takes a revolutionary show like the Cosby Show to bring it back,” which premiered in 1984, Cunningham said. Though it may seem like everything has been done, it’s a recurring cycle.

“I’m not convinced that the sitcom genre is ‘dying,’ said Nancy Worthington, Ph.D, Chairperson of Media Studies. “Its death has been pronounced numerous times in the past, but it has come back each time.”

Worthington added that her students do a lot of ‘time-shifting,’ meaning that students tend to watch TV at times other than the broadcast schedule, using DVR or streaming online content. Programs involving competition, such as American Idol, are the only types that reliably attract college-age viewers in real time, according to Dr. Worthington’s observations.

The concept of real-time, or watching television shows as they air on our TV screens, plays a less important role in entertainment consumption than it did even five years ago. This also affects a TV show’s capability to attract large audiences as the number of individualized ways to see episodes increases. This includes TiVo, DVR and OnDemand. In a TV Guide news article, DVR was declared the new ”No.1 network in primetime television.”

During television’s fall 2012 premiere week, the four major networks failed to stack up against the DVR in average total viewers. DVR attracted 11.3 million, followed by CBS with 10.7 million, NBC with 8.7 million and Fox holding 5.9 million.

“I frequently use DVR to record shows I want to watch,” said freshman Jennifer Wank. “It is easier to watch them on my own schedule and not be obligated to sit down at a certain time every week.”

The Internet plays a large role, as well, since websites such as Netflix, Hulu Plus, iTunes, and ch131.com allow viewers to customize their experience on their own time. Netflix even created it’s own television show this year, “House of Cards,” with big-name actors like Kevin Spacey. These developments further the competition with traditional TV, and have some speculating that television in real time could become obsolete.

The overload of choices may also be why so many television series have failed in the past year. It’s not because TV shows are unpopular, it’s that people are watching on there own time within their own niche of interests.

“It does seem like the greater choice afforded by technology has made such popularity for a single program more difficult,” said Dr. Worthington.

“We are in the midst of a technology transition and waiting to see if the general masses will find the internet the general source of entertainment,” said Cunningham. “Even YouTube tried to replicate HBO’s series “Funny or Die” and it failed.”

However, just as the Kindle didn’t kill off traditional books, the internet most likely won’t kill off television. But it may take someone to successfully combine the most popular medium to watch content with a storyline of mass appeal before the decline in television popularity reverses. An appealing storyline could even come from something of the past.

“So the question is will the Internet carry over the “Friends” legacy?” said Cunningham. Though this probably won’t happen, he said, “you can never underestimate the power of nostalgia.”

Current generations will inflict our past on the next generation, bringing back old favorites like “Friends” and “Seinfeld.” This is similar to what the CW did with the “Carrie Diaries,” creating a prequel to the late 1990s hit HBO show, “Sex and the City.”

The generation currently in college or in their late twenties could revive television by combining the power of the past with new technology.