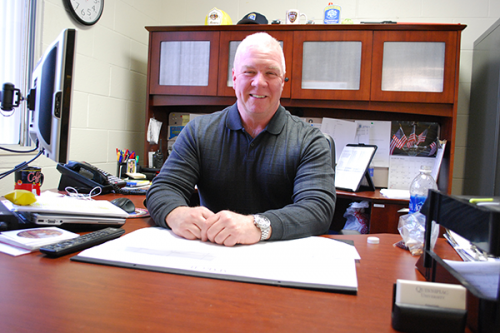 While Quinnipiac University’s students retreated to beaches, boats and ski resorts for spring break, the Department of Public Safety was busy training its newly appointed sergeants to better serve the university community.

Quinnipiac hosted “Polishing the Badge: Front Line Leadership,” a half-week training seminar in March, for its nine new sergeants in Public Safety. The seminar, which was put on by the Connecticut Police Academy, was also attended by 42 other officers, including police officers from across the state and public safety officers from other universities. The seminar focused largely on the enhancement of officers’ leadership qualities, teaching them different team dynamics, strategies and other skills.

The seminar was just another link in a chain of new training that began in July when the department changed its name from Security to Public Safety.

“When we transitioned from Security to Public Safety, we realized that as Security we didn’t have a great deal of training,” Chief of Public Safety David Barger said.

Following this revelation, Public Safety sent 15 officers to Fairfield University to attend its “Campus Public Safety Officer Training Academy.” This was a 60 hour course, which covered numerous topics such as report writing, sexual harassment, crime response, chemical sprays and Title IX. Barger said officers brought back knowledge from Fairfield that has helped them better serve the Quinnipiac community, and the department wanted other officers to benefit from the training.

“We wanted to do that school again during the winter intersession. We ended up doing our own school, calling on a number of resources we have,” Barger said. “We wanted to run it ourselves to see how it worked for our people, and it worked very very well.”

One of the key players in orchestrating the training was Public Safety Training Consultant Richard Hally. Hally was hired in July as part of the transition from Security to Public Safety. He conducts monthly training sessions with the department’s officers in order for them to better serve the Quinnipiac community. 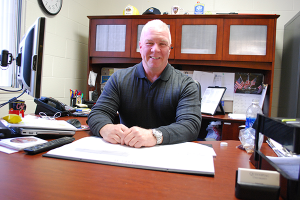 “[Hally] is certified by FEMA, he’s certified by Homeland Security,” Barger said. “He brings in a depth of knowledge of campuses, police departments, fire departments and emergency response teams. He has a big picture and we were lucky enough to get him here.”

When Hally was first hired, he evaluated Public Safety and analyzed what skills the officers needed to learn. Hally began by looking at the department’s resources and worked with what the officers already had at their disposal.

“When I first got here I evaluated: what do [the officers] do every day?” Hally said.

Hally found that the two problems Public Safety faces the most are medical calls and car lockouts. He brought in auto technicians and showed officers how to properly unlock a student’s car when the situation arises.  Afterward he worked on bringing other resources into the department and training the officers in new skills.

“Basically what I looked at was our patrol vehicles, the equipment we had in them and if the officers were properly trained to use all of the equipment,” Hally said. “Some had a little [training] but most officers did not.”

Hally has since trained officers in many other fields. He trained officers and personnel from Facilities and Residential Life on fire extinguishers. He also trained Public Safety officers in forcible entry, hazardous materials and defensive driving, and brought in a dive suit for cold-water rescue training.

Hally and Barger also divided Public Safety’s officers into four squads. The squads alternate training weeks with Hally and total about nine hours of additional training each month, which, according to Barger, is more training than most police officers receive in Connecticut.

“We’re keeping up with all of the basic stuff,” Hally said. “I was able to get a Blackboard website. Right now we have our policy procedures on it. Eventually I am going to start putting training on there.”

Public Safety’s elevated training allows the department to work more efficiently and prepares officers for many situations that could arise. New training also allows Public Safety to adapt to Quinnipiac’s constant growth, and could lead to some changes in the future.

“As we grow, not only does Public Safety have a larger area to cover, but our census here of students has become greater,” Barger said. “I can see a day when we would be carrying defensive weapons.”

Barger has no timetable at the moment, but said the training at Fairfield University and Hally’s new programs have helped lay the foundations to train officers to use defensive weapons in the future. Hally is constantly evaluating the department and making sure the officers are all on par with training in order to build up to new programs such as defensive weapons.

“You really can draw a parallel to academics. You can’t progress until you hit certain benchmarks,” Barger said. “We can’t get to the 401 class without going through the 201 class. We start a lot of things at 101, and that’s why training is constant.”

Outside of defensive weapons, Public Safety is looking to bring other defensive techniques to Quinnipiac. Hally has already organized CPR courses with Human Resources, and is currently working on a plan to offer Rape Aggression Defense, or R.A.D., to the university community.

“We’re going to send several of our officers to be trained to be instructors,” Hally said. “Once that’s done, hopefully for next semester, we will be able to offer that to female students.”

According to Barger, Hally’s efforts are turning Quinnipiac into a premier site for public safety training in Connecticut. He said he receives calls from other schools and police departments each day asking him about the university’s training programs.

Barger said his department is planning on hosting more seminars over the summer not only to train Quinnipiac’s officers, but to share that training with other universities and police departments. There is already a bike training course planned for the weeks following commencement.

“If we do training here, that really moves a lot of other universities to do training. They look at us and say, ‘Quinnipiac is doing all of this training, why can’t we do training?’” Barger said. “We want to establish ourselves as being a place where people will look and say, ‘Wow, these guys really train and we would like to get on board with them and take part in some of their training.’ We’re going to offer this off to other places.”