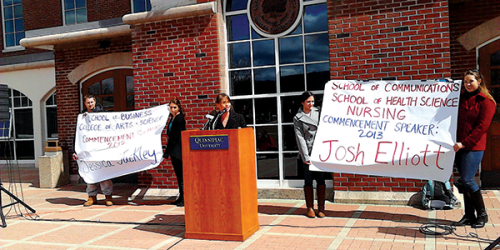 The commencement speakers for the two graduation ceremonies were announced on Tuesday. Jessica Jackley, the co-founder and former chief marketing officer of the microlending website KIVA, will speak at the School of Business and College of Arts and Sciences ceremony. At the School of Communications, School of Health Sciences and School of Nursing ceremony, Good Morning America’s news anchor Josh Elliott will speak.

In the spring of 2004, Jackley founded KIVA, a non-profit organization that allows people to loan money to poor entrepreneurs across the globe, according to its website. Jackley created the website to give people a way to help the rural entrepreneurs she had met in East Africa. In  2009, Jackley started ProFounder, a website where small businesses can raise money from their community to kickstart their company. ProFounder shut down in 2012, according to its website. She also teaches Global Entrepreneurship at the University of Southern California Marshall School of Business, the KIVA website said.

Besides being the news anchor for Good Morning America, Elliott has been part of ESPN SportsCenter, ESPN First Take and ESPNews, Senior Class President Andrea Rogers said at the announcement on Tuesday. In 2005, Elliott earned a New York Emmy for his writing and reporting contributions for Madison Square Garden’s program Angles: Religion in the NFL, according to ABC News.

“Unlike high profile schools who get to have huge-huge names and huge celebrities we tend to choose people who are still well known and still have a good impact and still be someone the students can relate to,” Rogers said.

Senior Public Relations Major Faith Goumas is pleased that Elliott has been chosen as the commencement speaker.

“I watch Good Morning America and I know my family does too and because they will all be going to graduation I think they’ll all be really happy to hear him speak,” she said.

Goumas hopes that Elliott touches on the growth of the communications industry.

“Especially with us all entering [the communications industry], it will be interesting to hear what [Elliott] has to say and hopefully he will point us to things that will help us in our career paths,” she said.