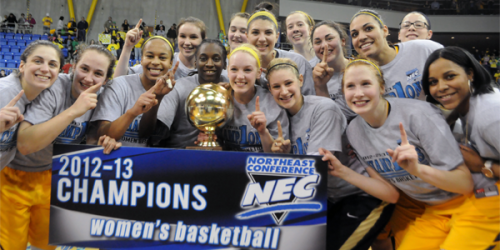 Following a disappointing end to last season when the Quinnipiac women’s basketball team fell to Monmouth at home, 69-66, in the semifinals of the Northeast Conference tournament, head coach Tricia Fabbri got her first post game text.

The text was from now sophomore guard Gillian Abshire and simply said, “coach we’re going to get it next year.”

Fabbri said, from that point on, that was the “sentiment” of the team and that it was “unwavering” to see what their goal was.

Top-seeded Quinnipiac was crowned with its first NEC tournament championship trophy this evening with a 72-33 victory over No. 4 Saint Francis (Pa). They now will go the big dance for the first time in the history of the men’s or women’s basketball program.
[media-credit name=”Matt Eisenberg” align=”alignright” width=”300″] 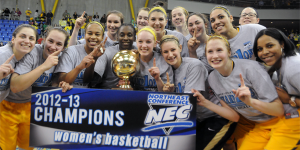 [/media-credit]
“Right now, it’s really surreal and we are just trying to let it all sink in but this is everything we’ve talked about since we lost to Monmouth in that semifinal game last year,” junior forward Brittany McQuain said. “I think that finally accomplishing it is exactly what we wanted and I’m so proud of everything we’ve done.”

Fabbri also showed her excitement in the postgame conference.

“So thrilled for the program to win its first NEC championship,” Fabbri said. “So pleased for all 15 young ladies who came together and grew as a team. So excited for my staff who has been phenomenal all year long putting together a great roster for us to go out and compete with and just thrilled that John Lahey, Mark Thompson and Jack McDonald are the leaders of the university that allow us to go out and do what we have to, do what we want to, do what we need to do, to make this program a winner.”

On Monday night, the team will get to watch the name they wear on the front of their gold and blue jerseys appear in front of their eyes on the TV screen in the NCAA selection show.

“You know, you dream of that as a little girl growing up,” senior guard Lisa Lebak said. “It’s the only thing you want to see, you and your schools name in lights on the big screen and you know what, we finally accomplished that and it’s the best feeling ever. You accomplished a goal you set since you were little and it’s awesome.”

The Bobcats will be seeded in the selection show tomorrow and join the field of 64 as well as find out who their next opponent is.

Fabbri, who was named NEC Coach of the Year this season after completing a perfect 18-0 conference schedule is in her 18th year at Quinnipiac and has brought the program up from the bottom.

“For me, this is fantastic,” Fabbri exclaimed. “Personally, watching Quinnipiac go up on the screen in the field of 64 is just my dream come true.”

Not only did Quinnipiac complete the regular season sweep of the conference, but they added three more tournament wins to that mark, making them a perfect 21-0 against conference opponents in its last season in the NEC. The last opponent to top them was Monmouth in the aforementioned semifinal game more than a year ago.

The win also extended the team’s winning streak to 22 games and gave them 30 wins on the season, both of which are program records. They are also just one of six teams in the NCAA to finish with 30 wins joining powerhouses Duke, Baylor, Notre Dame, Delaware and Stamford.

As for the game, it was all Quinnipiac from the start. They began the game on a 11-3 run and the Red Flash’s only lead of the game was following their opening possession when they nailed a 3-pointer to take a 3-2 lead. After that, the Red Flash went 8:02 without putting a point up missing 11 straight shots from the floor and two free throws during that span.

Lebak, who entered the game averaging just 2.2 points per game nailed two 3-pointers in the first half to set the pace for the Bobcats. She also added seven rebounds and two assists and didn’t turn the ball over once in the first 20 minutes.

“Lisa has been playing the best ball of her career for the last 10 games and she has been running the team and then there’s always one 3 every game she hit that was always in a big spot and today there was no exception,” Fabbri said.

Senior guard Felicia Barron led the Bobcats heading into the locker room with seven points and a 32-15 lead. She would finish the game with nine points, five rebounds and four steals.

In the second half it was all Quinnipiac once again through the first 10 minutes. Saint Francis didn’t get its first basket of the second half until 2:45 in and then they went 8:56 seconds before scoring again. The Bobcats rallied for 18 points during the span and held a 55-17 lead with 8:34 seconds remaining in the game.

Although the Bobcats defense was stifling the whole game allowing the lowest point total in the 18-year history of the NEC, the most impressive stat may have been the lack of points for Saint Francis forward Alli Williams who led her team in scoring at 17.5 points per game which was second in the NEC. Williams finished the first half with no points on 0-of-4 shooting and got just one basket to fall in the second on a layup. She also turned the ball over three times.
McQuain ended up leading the Bobcats with eight points in the second half to finish with a game-high 14. She also grabbed seven rebounds and was named NEC tournament MVP averaging 11.67 points per game to go along with 10.3 rebounds per game.

Sophomore guard Jasmine Martin, who was the spark in the second half that propelled Quinnipiac in the semifinals, picked up two early fouls and sat for most of the first half. She however was never worried that her sitting would hurt her team.

“I’m so proud of my team, how they stepped up,” Martin said. “I wasn’t worried for a second. I really wasn’t. The passion that I have seen in the fourteen other of my teammates is unreal and I knew that they were going to hold us down. It was amazing to watch the first half because I didn’t play. It was amazing to watch what my team was capable of.”

Samantha Guastella finished in second in scoring for the Bobcats with 10 points off the bench along with seven rebounds. Martin finished with eight points and Abshire had six to go along with six assists and eight rebounds, both of which led the team.

For the Red Flash, Alexa Hayward was the top scorer with eight. Kelly Doogan was the only other player with more than four points as she finished with six off the bench.

The Bobcats also dominated on the boards, outrebounding Saint Francis 54-38.

With 1:41 remaining in the game, Fabbri was able to give her two seniors a warm round of applause from the crowd as she took them out of the game for the last time at the TD Bank Sports Center. As each of them made their way to the bench, Fabbri gave them a hug and whispered one thing into their ear.

“Thanks for making my dream come true,” Fabbri said.