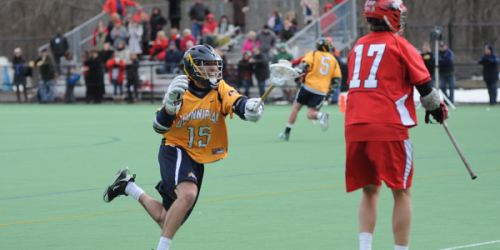 The Quinnipiac men’s lacrosse team started the season 3-0 and earned a spot in the national rankings at No. 20. But today, the Bobcats dropped their second straight game by one goal as they fell to Hartford, 11-10. 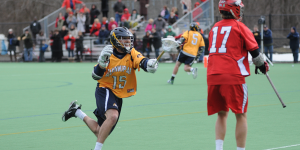 In the second half, the teams went back and forth trading goals but the Bobcats didn’t let the Hawks regain the lead for the majority of the half. But with 7:14 remaining in the fourth, Hartford (2-3) got its first lead of the second half as Rory Nunamacher beat Quinnipiac goalie Gill Connors on an assist from Kevin O’Shea. The Hawks then extended their lead to the biggest since the beginning of the second quarter as Austin Gorman buried his third goal of the game with 5:08 remaining.

Quinnipiac was able to get one back as Jake Emms beat Hartford goalie Frank Piechota for his first goal of the game.

After Hartford possessed the ball and killed the clock to the final 60 seconds, Connors made a huge save and Quinnipiac was able to get the ball in their offensive zone with a chance to tie as Fekete called a timeout with 39.3 seconds remaining.

The Bobcats were able to get two shots off but both sailed wide as they fell the Hawks, 11-10.

“Bottom line is it’s two one goal losses but the scoreboard doesn’t really matter,” Fekete said. “We turned the ball over 19 times today, we dropped the ball in the crease probably three or four times today and our best players didn’t play great.”

While Quinnipiac turned it over 19 times, they forced 16 turnovers on Hartford.

Fekete thought his team didn’t execute and that was the reason they didn’t win.

“I give them [Hartford] all the credit in the world,” Fekete said. “I told the guys after the loss on Tuesday you need three things to win close games. You need to execute, you need poise and you need confidence and I think [we] probably lacked some poise and didn’t execute.

Along with turning the ball over more than Hartford, Quinnipiac also lost the faceoff battle winning just 10 of 25 draws.

“Dylan is our guy,” Fekete said with confidence. “We kind of succeed and fail on him. He certainly struggled today and I think the last two games compared to the first three we just lacked execution in certain areas.”

After losing two close games, Quinnipiac will now take on one of its toughest opponents on the year on Tuesday as they travel to Fairfield.

Fekete thinks his team has struggled in the last two games because they have worried too much about who they are facing rather than their own game plan.

“The first three games we knew what we were getting, got the scout and told them what we were going to get from the other team and we worried about what we were going to do,” Fekete said. “I don’t know, maybe it’s the rivalries, getting back in New England Lacrosse [Poll], but I think we got a little too hung up on what these guys did and we didn’t play well today.”

Despite the loss, Connors tied his career-high with 20 saves on 31 shots faced. Hartford switched goalies from Dan Zenevitch in the first half to Piechota. Zenevitch stopped four out of nine shots while Piechota mirrored his stats in the second half.

Basil Kostaras was the only Bobcat with more than one score on the day and added an assist. Brendan Wilbur finished with one goal and two assists and was the only other Bobcat with three points.