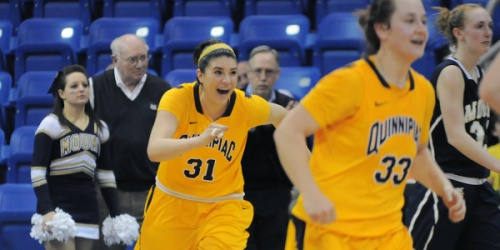 For just the second time in the history of the program, the Quinnipiac women’s basketball team will play in the Northeast Conference Tournament Championship game.

The team moved on to the title game after a 63-56 win over the six seed, Mount St. Mary’s on Wednesday night.

After first beating No. 8 Bryant in the NEC quarterfinals, Quinnipiac will host No. 5 Saint Francis (Pa) on Sunday at 5 p.m. in the NEC Championship Game, at the TD Bank Sports Center in Hamden, Conn.

“Saint Francis Pennsylvania is in my opinion the best defensive team outside of ourselves that we’re going to see,” Quinnipiac head coach Tricia Fabbri said. “They defend, they rebound, they run, they don’t turn the ball over, but we’re going to need to be ready for their personnel and do what we do and get ready for their sets.”
[media-credit name=”Matt Eisenberg” align=”alignright” width=”300″] 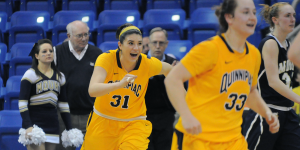 [/media-credit]
In tonight’s game, Quinnipiac (29-2, 18-0 NEC) headed into the locker rooms trailing for just the seventh time in 31 games, but the Bobcats stayed close to The Mount and never trailed by more than nine points in the second half.

Following a 10-4 run by Mount St. Mary’s (15-16, 10-8 NEC) to start the second half, Quinnipiac called a timeout. When the Bobcats came out of the timeout, they were a different team and Jasmine Martin turned her “takeover” switch on.

“I made up my mind and said I had to takeover,” the sophomore guard said. “Coming out of halftime, I usually look at my dad but I looked up at him [today] and he said ‘takeover.’”

Martin began to warm up by sinking two free throws right out of the timeout. On her very next possession, Martin drained a 3-pointer and then went on to get a steal and ran the fast break all the way in for the score herself, narrowing the deficit to one. Samantha Guastella then had a huge block on the other end of the court forcing a shot clot violation on The Mount. Guastella transitioned her defense into offense and hit a 3-pointer of her own, electrifying the crowd and giving the Bobcats their first lead of the second half after the 10-0 run.

Martin said that she was planning on taking over anyway but after reading her dad’s lips, she got encouraged and was ready to step up.

Martin added four of the next six points to help pace Quinnipiac down the stretch. Brittany McQuain, who had been having a slow game on the offensive side of the ball hit back-to-back shots to give Quinnipiac a six point edge with six minutes left.

“It was the difference in the game and gave us all the momentum going down the stretch,” Fabbri said. “She’s the reason why we were able to extend, not only with [Selena] Mann being out, but with Jazz’s mentality and the ball was in her hands and we just kept saying, ‘lets keep going to her’ and she just responded every time.”

Mount St. Mary’s made one final charge and got back within one with 4:08 remaining after a Rachel Matthews layup and Jacqueline Brewer 3-pointer. But Quinnipiac was able to hit 6 of 8 free throws in the final 3:17 to hold off any chance of a comeback and win, 63-56.

In the first half, both teams ran quick paced offenses and were tied at nine with 16:25 remaining in the half. The teams remained close until the Bobcats went on a 12-2 run and found themselves up 25-18 with 8:33 left in the half. The Mount, behind the 3-point barrage of Brewer ended the half on a 16-4 run to take a 34-29 lead.

Fabbri noted that although Quinnipiac had 12 turnovers in the game, 11 of them came in the first half resulting in them trailing after the first 20 minutes for the first time since Feb. 23 at Sacred Heart.

Brewer finished with a team-high 20 points for Mount St. Mary’s and hit six of seven 3-pointers. But the Bobcats improved to 5-2 in games in which they trail at halftime.

Martin finished with a career and game-high of 22 points for Quinnipiac. Felicia Barron and McQuain joined Martin in double figures with 10 points each.

With the victory, Quinnipiac has set a new program record for wins with 29. In its last season in the NEC, the team could go out in unforgettable fashion. They already swept their regular season schedule, having gone 18-0 and now have won their last 20 games against conference opponents. Their last loss came in the NEC semifinals of last year when Monmouth upset them.

Win number 21 in the conference and 30 on the year however will be the most special of them all this year.

“I’m looking forward to Sunday’s game and cutting down our first net and NEC Title,” the NEC Coach of the Year said. “Winning that championship and everything that selection show Monday can bring and moving forward in the NCAA tournament.”