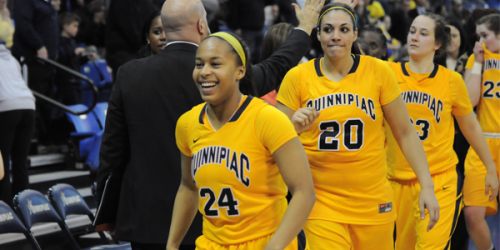 In its final season as a member of the Northeast Conference, the Quinnipiac women’s basketball team looks to leave its mark and finish on top.

Today, the team got one step closer to doing so.

For the third time this season, No. 1 Quinnipiac dominated No. 8 Bryant by a final score of 79-55. Just like the first two wins, the Bobcats victory came by double digits, something they have grown accustomed to this season. 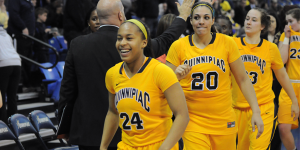 “We continue our (great) margin of victory which is pretty impressive,” Quinnipiac head coach Tricia Fabbri said. “We are beating everyone in our conference by at least 16, 17 points and today was no different.”

No. 1 Quinnipiac will host No. 6 Mount St. Mary’s on Wednesday at 7 p.m. at the TD Bank Sports Center in the NEC semifinals.

In its last 10 games, nine of Quinnipiac’s victories have come by at least 10 points and only twice did an in conference opponent finish within 10 points of the Bobcats in their 18 game conference schedule.

The Bobcats made a double digit margin look easy today and they reached that gap before the first media timeout.

After allowing Bulldog leading scorer Naana Ankoma-Mensa to score the games first basket, Quinnipiac (28-2, 18-0 NEC) went on a 14-0 run which would give them more than enough separation for the rest of the game.

The Bobcats headed into the break with an 18 point lead after forcing 15 first half turnovers, resulting in 19 points. Quinnipiac would finish the game with 27 forced turnovers.

Quinnipiac’s defense was also running on all cyclinders as the team finished with 18 steals, eight of which came from guard Gillian Abshire.

“Everyone came ready to play,” senior guard Felicia Barron said. “We knew that if we didn’t win this was it. So we just had to get down and do our defense because when our defense is really together no one could beat us in this league. So we just made that our main focus for this game.”

Barron, the NEC Defensive Player of the Year finished with a tie for the lead for points for Quinnipiac with 13 and also chipped in two steals.

Forward Samantha Guastella also had 13 points for the Bobcats off of 4 of 10 shooting.

Brittany McQuain continued her season dominance down low with a double-double of 11 point and 16 rebounds including eight on the offensive glass.

“Our focus in practice this week was to make sure that we get more offensive opportunities than the other team so that was my mindset going into it,” McQuain said. “You know that’s my role on this team, to rebound, so (I) just go up and get every ball that comes off the rim.”

“I thought we did a heck of a job rebounding the ball today and that’s always led to a lot of offensive possessions,” the NEC Coach of the Year said.

While the usual forces had good games for the Bobcats, the team produced one of its best team efforts of the season with all 10 players in the lineup scoring at least three points.

Coach addressed that Maria Napolitano was sick with the flu which gave fellow freshman Kaite Carroll a chance to see postseason minutes.

Carroll thrived in the opportunity going 3-for-4 from the line as well as picking up three assists.

“You saw Katie Carroll take advantage of an opportunity,” Fabbri said. “She was ready to go. She’s been primed all season. It was awesome to see her come out and be such a big contributor and get a win today.”

Senior guard Lisa Lebak also played smart with four assists and zero turnovers. She hit her only shot she took, a 3-pointer from the top of the key to extend the lead to 22 points with 8:15 remaining in the second half.

“I saw a senior leader out on the floor that was excited to extend her career in Lisa Lebak,” Fabbri said. “I thought she did a heck of a job defensively on Jenniqua Bailey but what she did was just efficiently run the offensive team. She’s done it all year long so there’s no surprise there. It’s just an excitement playing as her senior.”

While it was a great team effort, Fabbri noted that the one thing they must improve on is shooting as the Bobcats missed nearly 50 shots on the day going 28 of 77 from the floor.

The past two seasons, Monmouth has ended Quinnipiac’s season in the NEC Tournament. This year, that’s impossible as Mount St. Mary’s did the Bobcats a favor and got its first tournament win in 12 years by beating them in overtime, 59-57.