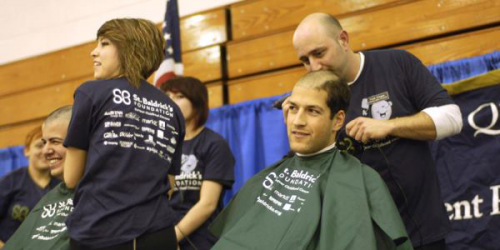 [/media-credit]Student Programming Board hosted the event, led by the traditions and community chair for SPB, sophomore Connor Hadley.

The money raised will go directly to the St. Baldrick’s Foundation to help fund pediatric cancer research, according to Hadley.

More than 70 volunteers shaved their heads, and even more people came to support the cause.

For the second year in a row, 5-year-old Logan Solomon was also in attendance. Logan was born with Down syndrome and was diagnosed with leukemia when he was two years old.

Junior Nick Sczerbinski found Logan and his mother Robin Raiano, a Quinnipiac graduate, online last year and said he knew he had to ask them to come.

“I got him to come last year and it was such a big thing and a good thing, and that kind of gave me more motivation to give a little more effort to raise more money this year,” he said.

Sczerbinski, who has gone bald at the St. Baldrick’s events for the past three years, doubled the amount of money he raised last year, bringing in $830 Tuesday night and, with more on its way, raised his total past $1,000.

“How could you not be motivated,” Sczerbinski said. “You’re seeing the direct cause. All you have to do is look at [Logan] and his smile. He has chemo tomorrow and you would never know.”

Sophomore English and education major Charlie Doe shaved his head for St. Baldrick’s last year with his fraternity, Sigma Phi Epsilon, and came back this year for round two.

“It was a great time, so this year I wanted to do the same thing and get a bunch of other people to come out with me,” Doe said. “My head is a bit chilly, but it’s nice. It’s fun finding other bald people.”

He made light of the dramatic change in appearance.

“[My hair] is never this short; it’s big and red and curly,” Doe said, smiling. “Now I can hide being a ginger.”

Taking part in his first St. Baldrick’s event, freshman Tyler Droste raised the most for an individual student, with $2,143.

“I felt like it was just the right thing to do as a student,” Droste said. “And I don’t need my hair, really, so I figured it would be a good event to donate it to.”

As these volunteers don bare domes in cold weather as winter comes to an end, seeing other bald students on campus will make them feel more united, Hadley said.

“I love seeing everyone the next day with shaved heads walking around campus, and knowing that they did it for such a great cause,” Hadley said. “Everyone knows that those guys shaved their heads to stand in solidarity with these kids who are battling cancer; it’s just a great feeling.”