In God we (sort of) trust 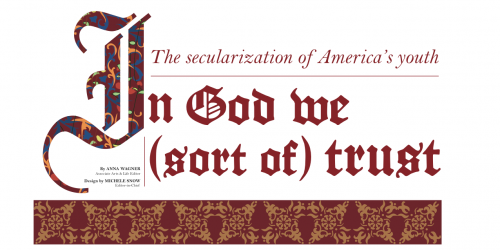 It’s a Sunday morning and students sit in their common room, watching football or reruns of “Friends.” Some crowd the library cubbies, cramming for Monday’s mid-term exams, while others take time to pick up groceries or booze for the upcoming weekend; Sunday is just a day.

But a flashback to 20 years ago reveals a much different picture. Stores are closed and it was against the law to sell liquor on a Sunday and religious affiliation was 19 percent higher.

Today, 1 in 5 young adults under the age of 30 are checking off the “unaffiliated” box on common applications, census surveys and other legal documents according to the Pew Research Center of Public Life.

Junior Staci Canny, a journalism major from Wallingford Conn., said she is the one in that five, and considers herself secular due to her lack of interest and personal connection, as well as her busy schedule.

“I just went through the motions. I never had any actual connection to the religion, so I feel that’s a big part of [secularization],” Canny said. She was baptized and confirmed as a Roman Catholic, but now she’s preferring reason over her original faith, believing in evolution.

“The decline in religion was bound to happen, with this technological revolution, we live in a fast paced culture and we want answers right away. It just doesn’t fit in with our lifestyle,” she said.

Canny isn’t bitter about religion, nor about people who have religious affiliations. She said she supports people having their own set of beliefs. Some students like Erica Rocco, a senior media studies major from Antelope Cali. believe that a belief in anything could be beneficial.

“I don’t think a decline in religious affiliation is a bad thing if people still believe in something” said Rocco. “I don’t think that something has to be God necessarily, but as long as they have a belief in a set of morals and values I think things will be OK.”

The decline in religious affiliation doesn’t apply to some, such as junior Zach Daly, a broadcast journalism major from Wyckoff N.J., who is on the other end of the spectrum. He keeps his faith close to him, despite a busy schedule. Daly said he was raised Catholic and went through both Catholic elementary and high school.

“America is promoting a very secular culture today. Morality is disappearing, and that is a very dangerous thing,” Daly said, a Grand Knight at the all-male Catholic organization Knights of Columbus. Unlike 19 percent of young Americans who think religion is unnecessary, Daly believes it’s a fundamental part of life.

“People are always complaining that there is an excessive amount of violence today, and asking where religion and faith have gone in today’s culture,” Daly said. “I believe that the reason that there is no morality in today’s society is because we have told God that we don’t need him. If we want society to fix itself, we need to allow God back into our lives.”

The religious presence on Quinnipiac’s campus is prevalent. Student and faculty received ashes on Ash Wednesday or walk to the Hillel house. According to Quinnipiac’s Catholic Chaplain, Hugh Dyer, faith still has a strong presence, but the lack of commitment is still apparent, especially on college campuses.

“Staff and faculty will talk about the ease with which students blow off appointments, just don’t show up or have an excuse to reschedule three more times,” Dyer said. “If you look at divorce statistics, people are having a difficult time doing the sacrifice of commitment, so yes, we are seeing that in some degree in the church.”

Dyer said that although the culture as a whole is “distracted and non-committal,” and the quantity of people attending church has declined, the quality of those involved seem to be more dedicated.

Among the young, unaffiliated people, there are more atheists and agnostics coming forward. Both either doubt the existence of a god or unsure about it.

Junior Alex Leonhard, a computer information systems major from Hewlett N.J., was raised without a religious affiliation on purpose, and feels that the decline of religion could be beneficial to our society.

“I just feel that people who are fundamentally religious are anti-common sense, and anti-science,” Leonhard said. “Any person should agree that pro-science and pro-common sense would make America better.”

Leonhard added that he feels like most of the QU community doesn’t apply to the new secular America and that most are very offended by atheist views.

“Many took our [atheist] existence personally, like we were out to get them, and that’s not the case.”

Jacob Morris, a sophomore Philosophy major from Brewster Mass., was raised Catholic but became an atheist. Morris believes religion is necessary for building strength in a community, but he’s also happy there’s a decline because religion allows people to stop questioning their existence.

However, Morris also does not see this decline in the QU community.

“I believe those that already held strong beliefs before are becoming stronger in the face of what they believe to be a threat, and those that never really had strong feelings in the first place are having those feelings weakened,” Morris said. “A lot of people at QU seem to identify with whatever religion they were raised with. I was raised catholic and decided to become an atheist, and I hope everyone questions their beliefs at some point in their life.”

As sacred places become emptier, those dedicated to their faith still participate. Although the decline in religious affiliation is prevalent, some people’s faith can never be shaken by demographics.