This Is Me: A battle of body and mind 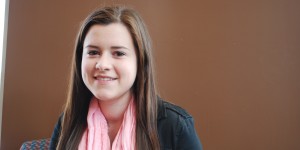 [/media-credit]At four years old, Rachael Kuhn stood in the ballet studio poised to dance, but something held her back: as she looked around the room she couldn’t help but notice even the smallest differences between herself and the other girls. Some were taller, a handful were skinnier, and although she didn’t realize it at the time, those feelings would plague her for years, until one day they took over her life.

Kuhn, a junior Occupational Therapy major, has struggled with an eating disorder since she was 13. Before entering treatment in December 2012, she was diagnosed with Atypical Anorexia Nervosa, a type of Eating Disorder Not Otherwise Specified (EDNOS). According to the National Association of Anorexia Nervosa and Associated Disorders (ANAD), EDNOS describes patients who do not meet the strict criteria for either Anorexia or Bulimia Nervosa, but who exhibit many of the symptoms of eating disorders.

Roughly 24 million people suffer from an eating disorder, and 25 percent of college-age women use binging and purging as a dietary technique in the U.S. according to ANAD. Its prevalence is a mounting concern because eating disorders have the highest mortality rate of any mental illness. The disorder with the highest mortality rate is EDNOS, which the American Journal of Psychiatry reports at 5.2 percent.

Kuhn’s disorder consists primarily of severe restrictions on what, and how much she allows herself to eat. This resulted in Kuhn losing one-third of her body weight since arriving at Quinnipiac as a freshman in 2010. But her problems didn’t begin when she went away to college. After a year of out-patient therapy between eight and ninth grade, Kuhn decided to deal with her issues independently.

Throughout high school and her first two years at Quinnipiac, Rachael experienced cycles in which she would get sick, lose weight, and finally stabilize by gaining weight. Then she’d restart the cycle of self-judgment that would lead back to her illness. People who weren’t aware of her disorder would pay positive attention to her weight loss because as Rachael said, in this society shedding pounds is viewed as an accomplishment, but for her, and many others suffering from eating disorders, it simply reinforces the desire to diet.

This past fall Rachael’s disorder intensified, to the point where she lost the ability to exercise for fear of passing out in the gym. She was eating a mere fraction of the recommended daily caloric intake of 2000 calories, and she had a list of “fear foods” a mile long that she avoided at all costs.

“Around October I guess you could say I hit rock bottom,” Kuhn said. “I was having anxiety attacks, I couldn’t sleep, I couldn’t study or focus. I wasn’t eating enough, and your brain doesn’t function when you are malnourished, so I couldn’t think, and I couldn’t remember what I was studying.”

For a student whose mother describes her as a perfectionist, the extent to which Kuhn was losing control of her daily activities caused an enormous amount of fear. Kuhn’s extreme dieting was hidden from many due to Kuhn’s determination to be in control of her own life.

“My only emotion that I felt when I was at my sickest point was disordered,” Kuhn said. “There wasn’t an emotion. I wasn’t happy, I wasn’t mad, I wasn’t sad. I just didn’t feel anything, because emotions are out of control. I felt like I couldn’t control my emotions so whenever I felt anything I just pushed it away and focused on the eating disorder, because that was easier.”

One of Rachael’s best friends at Quinnipiac is junior Brett Kaselouskas, who claims their friendship was fated after a trip to Walmart and a guiltily shared desire to watch “Camp Rock Two.” Though she had told Brett and other close friends about the eating disorder, Rachael’s pride and her independent nature kept her from revealing the depth of her problems.

“I spent a long time not knowing anything about Rachael’s eating disorder,” Kaselouskas said. “She was really good at fighting it all by herself. Looking back I wish I had noticed something sooner so that I could have helped, but I did not know what I was looking for. It wasn’t until this year that I became aware of how serious Rachael’s disorder was and how badly she needed help.”

Rachael realized that she needed help as well, and after her malnourishment drove her to snap at an undeserving roommate over a petty situation, she decided she needed it sooner rather than later.

“That night was just so scary. I was terrified, and I felt like I couldn’t handle anything. I was ready to drive myself to the emergency room, and I didn’t even know why,” Kuhn said.

Rachael’s mom, Lisa Kuhn, has worked for years to understand the true severity of Rachael’s condition. When Rachael called her that October night in the middle of a stress induced anxiety attack, she quickly began researching the different options for treatment.

Two days after Rachael finished the Fall 2012 semester, she enrolled in a partial hospitalization treatment program at Walden Behavioral Care in South Windsor, Conn. Each day she drove an hour and a half to the center where she stayed from 8 a.m. until 2:30 p.m., preparing and eating meals, meeting with a dietician and other doctors, and attending group therapy with other individuals who suffer from a variety of eating disorders

“The staff knew all of the tricks,” Kuhn said. “It’s a very deceptive disease. It’s all based on secrecy and lies, shame and deceit. So they knew, and they wouldn’t let us get away with it.”

The patients had strict rules and meal plans that they had to stick to, and each day they worked past challenges both physically and mentally. Rachael said one of the most important thing she learned was that when speaking about eating disorders for personal gain, she can be specific, but referencing specific caloric intake, behavior, or aspects of the disorder can potentially trigger reactions for others who are dealing with similar issues.

After just a week of treatment Rachael began to see results.

“Once we all got on board with the same program I could notice a huge difference in just her attitude,” Lisa said. “She was relaxed, she was happy, she was not stressed at all, she was just in a different place from probably the first week on. I think she was just so relieved that she was confronting this problem that it was just a huge change between when she came home and the end of the program. She’s like a different person.”

But despite the five weeks of treatment, and the dramatic improvement that Rachael has seen since December, she isn’t cured.

“It’s a struggle still, every single day,” Rachael said. “I could honestly see myself facing this for the rest of my life. I’ve heard it compared to alcoholism, where the person can never have a drink again because they’re in danger of falling back into that, but obviously I can’t avoid food. So there are days where I’m terrified that I’m relapsing. Like I thought I was just so strong coming back to school, and one tiny setback makes me feel like it is over. I feel like I’m not strong enough to handle school, or to handle life, but I get over it.”

Rachael is determined. Her family is behind her 100 percent, and her mother said this experience has only brought them closer. Before, the eating disorder stood as the elephant in the room between them, and now it’s another reason to offer support.

The happiness that Rachael gained from her recovery process is shared by her family, and she is now hoping to spread the message that her struggle, and the struggle shared by all people suffering from an eating disorder, is real. It is also detrimental to the lives it affects.

She said it’s possible to rise above an eating disorder, but only if those suffering are willing to give their whole heart to the fight. The happiness and empowerment of kicking EDNOS far outweighs the control she used to feel as a result of her dietary restrictions, Rachael said.

“I was sick for eight years,” Rachael said. “And those are years that I can’t get back. There’s nothing I can do about that, but I know that from this point on I don’t have to lose any more years.”