Siblings from California reunite on the ice 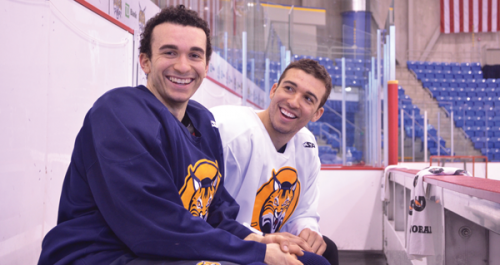 In 2010, Katy Perry claimed “nothin’ comes close, to the golden co-oast” in her pop-hit “California Gurls.”

For the California brothers on the men’s ice hockey team, nothing comes close to the feeling of being reunited and playing on the ice together for the Bobcats.

“Growing up, it has always been me and my brother,” said Loren, a senior defenseman. “We would always do everything together and it was just kind of us playing and growing throughout sports together.”
[media-credit id=1508 align=”alignright” width=”300″] 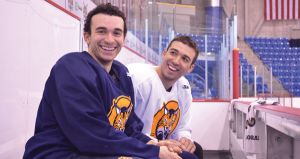 [/media-credit]
In 2009, Glendora, Calif. native Loren traveled more than 2,800 miles away from his brother to play for the Bobcats in Connecticut.

“When my brother first committed to this school I had no clue where it was, what it was,” Alex said. “I couldn’t even pronounce the name until I think after [Loren’s] sophomore or junior year.”

After deciphering the pronunciation of Quinnipiac, Alex committed to join his brother and the Bobcats in November 2011 and is currently a freshman on the No. 1 ice hockey team in the country.

Before their rendezvous at Quinnipiac, the brothers last shared the same zip code more than six years ago before Loren moved away from home to play junior ice hockey at the age of 18.

“It’s nice now that we’re back together, being in the same building and playing on the same ice,” Loren said. “Our parents can come down and watch us play. It’s really incredible to be fortunate enough to have this experience.”

With a lack of pond hockey in the Golden State, the Barron brothers fed their hunger for hockey on blades rather than skates.

“In California there is a hotbed of roller hockey,” Loren explained. “We both started playing roller hockey and once we got to high school, we were allowed to play ice hockey because of how much more expensive it is to play.”

The brothers would play roller hockey every summer. The past few summers, they both played for Team Mission. Loren has also played for the USA National InLine Hockey team.

“Everyone always played both growing up,” Loren said. “There was not a lot of ice hockey but there was roller hockey to counterbalance it. So there was a good base of California hockey players.”

He jokingly added that his brother and himself are still learning how to skate since they didn’t begin until high school.

Alex has followed in his brother’s footsteps since he first began to play roller hockey as a kid. But his next step was more influential, as he joined the Indiana Ice of the United States Hockey League after high school. Loren previously played for the Ice and led them to a Clark Cup Championship.

“It was great because Loren played in Indiana, and two years later, I played for the same exact team,” Alex said. “We lived with the same host family and they were unbelievable. It was a very easy transition for me to leave home and live with a family I was already familiar with and knew my brother.”

Alex doesn’t mind following his older brother and recognizes that he does so out of love and admiration for his brother.

“I’m a huge fan of my brother,” Alex said. “He’s my best friend and my role model. It would be a dream come true to play with my brother. He had a huge influence on me coming to this school and he’s actually one of the biggest factors and the reason why I’m here.”

Quinnipiac head coach Rand Pecknold first spotted Loren when he was playing with Indiana. Pecknold said he saw Loren as a skilled, two-way defenseman and someone who would be a solid contributor for the Bobcats.

“He struggled a little bit right out of the gate as a freshman, a couple of bumps there early but [he] figured it out, and in the playoffs of his freshman year, he was outstanding for us,” Pecknold said. “He was one of our better players and he’s been great ever since.”

Loren finished his freshman campaign with eight points off of three goals and five assists. As a sophomore, he found his passing touch, assisting on 17 goals on the year to lead the team. He was the first defenseman to lead in assists since current assistant coach and former Hobey Baker Award Nominee Reid Cashman did it in 2006. Loren also led the team in plus/minus with (+17). Last season, he found the back of the net a career-high nine times and also added 15 assists for 24 points on the season. In 34 games this season, he has notched three goals along with 10 assists.

After developing into what Pecknold considered a top-four defenseman as a freshman for the Bobcats, Alex immediately appeared as a red dot on the recruiting radar for the coaching staff.

“We already knew who he was because of Loren,” the 19-year tenured coach said. “He progressed and he also ended up in Indiana and was a really good player there and [we] thought he would be a good fit for us and it’s worked out really well.”

As a freshman defenseman on the top-ranked team in the country, with four senior defensemen, Alex has struggled to find as much playing time in his first year that Loren did. With two points on the season, Alex has found playing time by being a versatile player.

“The one thing I’ve been really happy with Alex is that we’ve been stuck a couple times and needed him to play forward and he’s done a nice job there playing right wing or defense,” Pecknold said.

Loren thought Alex’s ability to do so and the confidence Pecknold has to play him in both positions is a huge compliment.

While the two shared a bunk bed together for 13 years in California, they have been brought back to their childhood when the team is on the road this season as Pecknold rooms them together in hotels.

“We always have fun, share stories and are always laughing, and we really respect each other a lot,” Alex said. “We don’t invade each other’s privacy or do anything to piss each other off. It’s rooming with family, it’s awesome.”

Some of the stories they share are of their childhood memories.

“It was funny because every other year we’d both be the same height and then a year would go by and we’d switch heights,” Alex said thinking back to when they lived at home.
“Whenever we were a similar height, similar weight, we’d go at it everyday. Every little thing from who was first to the dinner table, to the stuff on the ice.”

While the child memories have brought them together, the Bobcats’ magical run this season has brought them even closer as Quinnipiac has been at the top of the rankings for the past four weeks.

“Honestly it’s a dream come true,” Alex said. “That’s all I can say. It’s so much fun. We’ve been away from each other for six years now and growing up together we were best friends. I’m thankful that he’s with me on the ice every day.”