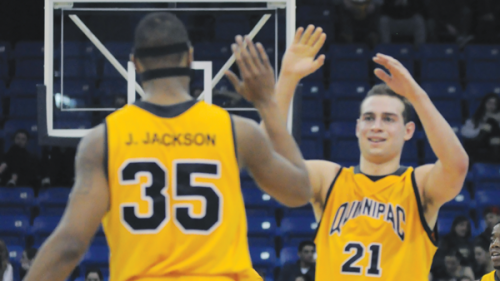 When Quinnipiac men’s basketball head coach Tom Moore went on a recruiting trip to New York City in 2011, he was not looking for a guard. As the coach explained, he “already had enough guards” for the upcoming season.

Moore attended the Catholic League semifinal matchup between Holy Cross and Christ the King to scout a forward.

When he saw guard Evan Conti play, however, his feelings changed.

“It was a Friday night, the place was packed,” Moore recalled. “I was watching the game and Evan was just fearless. He was taking on the whole Christ the King team and taking on the whole crowd. Taking every shot, defending the best scorer on the other team. He was playing really well.”
[media-credit name=”Matt Eisenberg” align=”alignright” width=”300″] 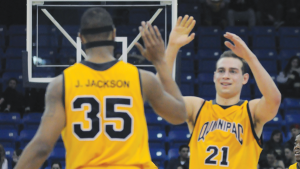 [/media-credit]
About a month after that game, a spot opened up for a guard on Moore’s roster. One of the first people he called to offer the scholarship to was Conti.

Conti was selected as a member of the Catholic High School Athletic Association’s first team after his senior season. He averaged nearly 18 points, 10 rebounds and five assists per game during that year, and ranks fifth all-time at Holy Cross High School in Bayside, N.Y., with 1,120 career points.

Still, Moore’s call was the only Division I offer Conti received.

“They used to say that I wasn’t good enough to play at this level,” Conti said. “They used every excuse in the book. I play with a chip on my shoulder because of that.”

In his freshman year, Conti averaged around eight minutes per game. He scored 53 points and grabbed 50 rebounds on the season.

“Everything was new to me,” Conti said. “I was just happy to be where I was, a Division I college basketball player. I was just really getting used to everything. As the season went on I started to produce more and more when given the chance.”

The highlight of Conti’s season was the last game of the year. After losing in the second round of the Northeast Conference Tournament, the Bobcats played the University of Penn in the College Basketball Invitational.

Though Quinnipiac lost that game 74-63, the freshman guard scored 14 points, shot 6 of 9 from the field and grabbed four rebounds.

“That game showed me I could really make an impact on the team,” Conti said. “It gave me a great level of confidence heading into the offseason.”

During the summer, Conti, as he has always done, continued to work hard. With a full season as a collegiate athlete under his belt and the knowledge of the system he played in, Conti looked to improve himself as a basketball player as much as he possibly could.
“I just waited for my opportunity,” he said.

This year has been much different for the 6-foot-3, 200-pound guard. The native of Bronx, N.Y. has played in 29 of Quinnipiac’s 30 games thus far and averaged more than 26 minutes per game. He is currently fourth on the team in scoring with 8.3 points per game. He is also grabbing 4.2 rebounds a game and has the team’s second highest assist total.

“That’s what happens in team sports,” Moore said. “Guys get opportunities, and it’s what you do with those opportunities that count. Evan has done a really nice job with making the most of his chances, and has become one of the staples of our offense.”

Perhaps his most memorable moment so far as a Bobcat came in a game on Feb. 14 vs. Robert Morris. Conti, in the middle of a six-game streak of scoring 10 points or more, scored a career-high 18 points and sunk the game-winning shot with only 13 seconds remaining.

Quinnipiac defeated Robert Morris, who will begin the NEC Tournament this week as the No. 1 overall seed, by the final of 63-61.

“This league is all about confidence,” Conti said. ‘You need to have confidence, and if you’re not confident then you aren’t going to be able to perform the way you need to perform.”

“That’s why I always feel good in clutch spots about Evan,” Moore said.

Conti also gets his confidence from one other life-changing experience during his high school career.

In 2009, he went to Philadelphia to try out for the Maccabi games. Known commonly as the “Jewish Olympics,” it is the second-largest sporting event in the world, trailing only the World Olympics.

Conti tried out for Team USA’s coach Brian Schiff and was given a spot on the roster immediately. He went on to win the tournament’s Most Valuable Player award in Israel.

“That was the greatest experience of my life,” Conti said. “I gained a great amount of positives out of that tournament. Having people in Israel know my name, that’s really special. It made me realize how many opportunities I have and how blessed I am.”

He will be participating for Team USA again this summer in the 19th edition of the Maccabi Games. The tournament will feature current and former college stars, including Duke’s John Scheyer.

Looking forward, Conti may have found an occupation for life after Quinnipiac.

“Playing professionally overseas is something I would really love to do,” he said.

Before that time, however, Conti looks forward to the remainder of his career as a Bobcat and sets no limits on the future.

“There’s always room for growth and improvement, I just need to keep getting better,” he said.

For now, Conti will continue to work with his teammates in pursuit of the ultimate goal before in his time at Quinnipiac: a shot at the big dance.

“The class I came in with is very humble, and very hard working,” Conti said. “Being a part of the first team at Quinnipiac to make it to the National Tournament is what we work every single day for.”