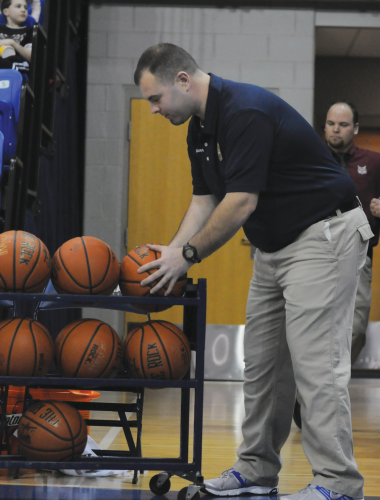 From attempting a professional career in baseball to working multiple part time jobs per week, James Schilkowski has earned where he is today.

Now as the assistant athletic director for equipment services at Quinnipiac, Schilkowski can put his years of training into play with something he loves to do.

For Schilkowski, baseball was the spark that lit his sports obsession.

He played baseball for Shelton High School in Shelton, Conn. and performed well enough to draw attention from schools and scouts.

“Sacred Heart came in and [had its] first Division I recruiting class and I really wanted to play Division I,” Schilkowski said. “I want ed to go to school and get an education first.”

Although Sacred Heart was making the transition from Division II during his time as a Pioneer, Schilkowski had a tremendous career. He finished it as the all-time leader for Sacred Heart at the Division I level with 78 walks and second for hits with 203. He’s also second in doubles with 56, RBIs with 120, total bases with 273 and a .450 slugging percentage.

After graduating with a sports management degree in 2004, he spent several months looking to make the jump to the big leagues.

Unfortunately, a major knee surgery forced him to get a real job and put his playing days in the past.

He then worked multiple jobs per week from substitute teaching to bartending to try and stay afloat.

Eventually, an internship he worked while at Sacred Heart for Quinnipiac athletics allowed him to get his foot in the door with the Bobcats.

“When Quinnipiac came down to Sacred heart, I’d see Jack McDonald or Billy Mecca and ask them how they were doing and stayed in touch with people after I graduated,” Schilkowski said.

After working that summer with Quinnipiac, Schilkowski joined as a full-time member helping out with game programming. He would however find his way back to Sacred Heart for two years and four months before eventually returning to Quinnipiac to take his current position.
[media-credit name=”Matt Eisenberg” align=”alignright” width=”228″] 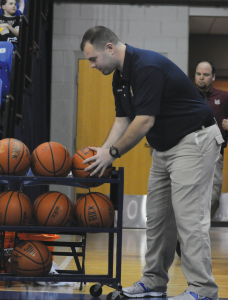 [/media-credit]
“I kind of fell into where I am now with equipment,” Schilkowski said. “I didn’t really know anything about hockey until I first worked here.”

Much of what he has learned in his three and a half years as equipment manager has come from watching others as well as getting help from coaches and other people in the business. The most informational sources, however, are the athletes, according to Schilkowski.

“You really learn a lot from players,” said Schilkowski, who created the student-athlete handbook when he was interning at Quinnipiac. “You’ve got all these kids who have been skating since they were three years old, they know a lot more about things you don’t know.”

Schilkowski has worked numerous sports, including football when he worked at Sacred Heart. After working football and hockey, he says that hockey is a more high-maintenance sport.

The players wear more equipment in hockey and skates require more time than cleats, he said.

One of his duties as equipment manager is to order equipment for most of Quinnipiac’s sports, including hockey, which is one of the most difficult with all the different customizations available to players.

“The sticks, for example, are personalized just like you would see in the NHL,” Schilkowski said. “The sticks have its flex, its curve, what type of stick, all that stuff.”

What’s possibly even harder to predict is how many sticks a player will go through in a season as sticks snap like twigs according to Schilkowski.

“There are a lot of factors that go into that,” he said. “For example we just had a player that was injured for a good four weeks, lower body injury, so they spent a lot of time in the weight room to keep up with their strength but they ended up getting more strength in the upper body. So the stick they had been using for the last three years we now had to reorder and make more stiff because the sticks were not cutting it.”

After working at Quinnipiac for a few years, he estimated players on the men’s ice hockey team go through an average of 18-21 sticks per season while the women’s team averages six.
Another challenge in ordering is the players’ skates, which have different adaptations as well.

“It’s not everybody but some players need two different sized skates,” he added. “One player might have a size five skate and the next player might have a 5.5 right foot and a 5.25 left foot. There’s different widths to the skates and different tongues so there’s really a lot that goes on in ordering for hockey and each player in particular.”

While ordering equipment for just the hockey team is difficult, Schilkowski’s biggest challenge is in the near future.

In a few weeks, he will head out to Minnesota, where the 2013 Women’s Frozen Four is being held, to get an idea on just how he should plan next year’s edition.

“We’ve already begun planning for that,” Schilkowski said. “So to get to do that stuff is exciting. It’s a big step for Quinnipiac and myself helping take on that role showing what I can do and hopefully move up the ranks.”