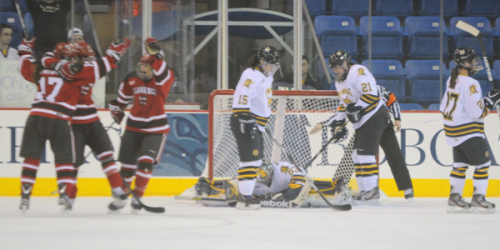 Before tonight’s game against St. Lawrence, the only time the Quinnipiac women’s ice hockey team played at High Point Solutions Arena at TD Bank Sports Center in the ECAC tournament was in 2010, when it fell to Rensselaer in its last game, a final of 2-1 in five overtimes, ending its season.

The Bobcats, yet again, found themselves in extra minutes on Friday night in the ECAC Tournament opener. 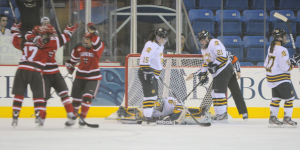 [/media-credit]With 10:56 left in the first overtime period, St. Lawrence’s Kayla Raniwsky found the back of the net off a rebound for the only goal of the game to give Saint Lawrence the 1-0 series advantage, and the 1-0 victory.

“It was a great hockey game,” Quinnipiac head coach Rick Seeley said. “We played hard, and stuck to our system pretty well. Sometimes those are just the breaks you don’t get.”

The story of the night was the two goalies for both teams. St. Lawrence’s Carmen MacDonald made 46 saves and shutout the Bobcats, while Victoria Vigilanti had 28 saves on 29 shots.

The Bobcats held the shot advantage for the night by a margin of 46-39, and both teams successfully killed off two penalties.

Quinnipiac, who is the No. 4 seed in the ECAC Tournament, now needs to beat the No. 5 Saints in two straight games to advance to the next round.

“We have to finish,” Seeley said looking forward to tomorrow. “We had a lot of good opportunities tonight that we didn’t capitalize on.”

The two teams square off in Hamden tomorrow again at 4 p.m.