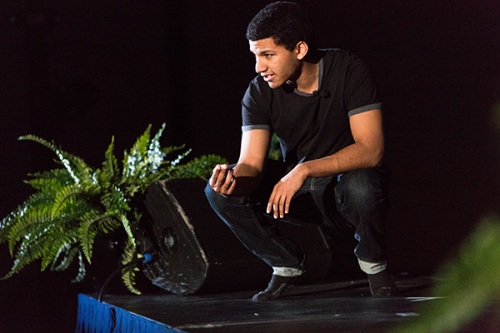 Members of First Wave Hip Hop and Urban Arts Learning Community highlighted Black History Month on campus Feb. 21, filling Burt Kahn with a unique combination of music, dance and spoken word. Sixty students are involved with the program at University of Wisconsin Madison, five of which came to campus to start a dialogue about civil rights, surrounding themes like purpose, power and responsibility as today’s youth struggle to find their place in society.

First Wave’s project, titled “Kingdom Bequeath: Civil Rights in the 21st Century,” is a new adventure for the group. They recently added poems and choreography as late as the week before arriving at Quinnipiac. The stories they told and the questions they asked stemmed from personal experiences, said Thiahera LeSian Nurse and Janel Lee Herrera, two performers from First Wave. They practice once a week for two hours, “but we are really always practicing and rehearsing every day,” Herrera said. “Being a part of First Wave is a way of life.”

First Wave was founded by Willie Ney, the executive director of the Office of Multicultural Arts Initiatives at the University of Wisconsin-Madison. It’s designed to create a learning community dedicated to hip-hop arts and theater while helping participants grow as artists and succeed as students according to their website. Some students are published authors, internationally ranked poets, rappers on the underground scene and community organizers. Students accepted into the program receive a full four-year scholarship funded by the university.

Fifteen students are admitted each year and the university looks for students who demonstrate the “Three A’s: arts, academia and activism.” That’s the foundation of the program said Chris Walker, artistic director of First Wave.

“Education without art is unbalanced,” he said during his opening presentation at Quinnipiac.

Mohammed Bey, Director of Multicultural and Global Education on campus, previously worked in the Wisconsin University system and spent a lot of time in Madison, where the First Wave program is. Having seen the group perform last year at TD Bank Sports Center for an educational symposium, “it was then that we knew it would be a great opportunity to bring them in as the marquee performance for Black History Month,” Bey explained. “One of the biggest goals was to present academic engagement through the arts.”

“Sometimes the king is women… but the king is always you,” sang 19-year-old Herrera, a performer and songwriter.

While discussing the show, performer Thiahera Le Sian Nurse said she thought those lyrics were the most important message to take away. “You have to be able to look to yourself sometimes,” she explained. “What about those heroes are like you?”

The performance was short, but brought the audience to their feet when the final bows were taken on stage. The show was fast-paced, filled with upbeat raps, soulful poems and powerful vocals. The high energy was turned down a notch when the floor opened up for question and discussion about the act’s meaning and artists.

Attendees asked students of First Wave what they find encouraging, and how they cope with speaking about such personal hardships on stage after the curtain closes. Trying to stay connected with your past and dealing with the pressures of representing our community were issues many students felt connected to.

“Manifesting the past pain into art is what makes it all bearable,” said 22-year-old Cydney Edwards, a member of First Wave during the discussion. “Knowing that you are not alone is what also helps. We are able to have a support system.”

“I enjoyed the overall message of the show,” said Quinnipiac Sociology Professor Don Sawyer. “We tend to place people on pedestals without realizing our inner greatness and our ability to change the world through impacting our spheres of influence.” He encouraged students in his Sociology of Race and Sociology of Hip-Hop Culture courses to attend in order to see something they have never seen before. He felt it expanded their worldviews and exposed them to new forms of culture.

“The poets shared stories from their journey to higher education. They talked about the joys and pains of the process,” Professor Sawyer said. “This program was done in a way to expose students to the different life experiences of fellow college students.“

Many individuals found similarities in their own stories with those told on stage. And people from outside the Quinnipiac community, such as Minister Cynthia Bobo of the Christian Tabernacle Baptist Church in Hamden, joined the discussion, as well. She brought a group of singers and songwriters from the church’s choir to find inspiration for their new hip-hop songs.

“They talked about the same social issues we talk about in our devotion,” Bobo said. She was pleased that the writers were able see an outside connection.

“The performance really embodied black history month,” said freshman attendee Marcella D’Aston. “I’m really glad I went to see it.” The open and profound performance challenged students to broaden their own definition of art and experience the unadulterated talent of First Wave in their own community.