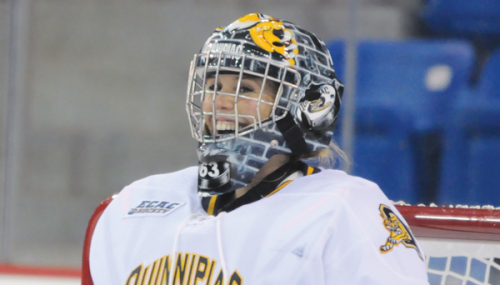 Just watching her teammate, and arguably her best friend, prepare for a game makes Regan Boulton laugh. She’s lived with Victoria Vigilanti for three years now and her pre-game rituals still get to her.

“She’ll just be sitting there before games with her headphones in … she’s just in her whole zone,” Boulton said with a smile. “It’s very amusing.”

Vigilanti, Quinnipiac’s senior goaltender, has many pre-game rituals, which is typically normal for a goaltender. She only drinks orange Gatorade in net. Her knee pads cannot be touched by anyone but her.

There are so many she lists that it’s tough for her to remember.

Before each game, she would play keep-ups, when her and some teammates hit a ball with their sticks and keep it up for as long as possible. One time the ball escaped and hit her knee pads.

“I thought the world was going to end,” said Boulton, also referred to as “Boots” by her teammates.

Yet both will admit that Vigilanti has toned it down since arriving in Hamden.
[media-credit name=”Matt Eisenberg” align=”alignright” width=”300″] 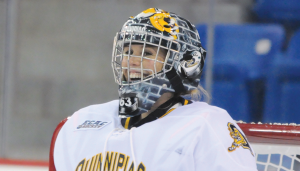 [/media-credit]
“Freshman year, I couldn’t even look at her before the game,” Boulton said.

They are the only two people in a self-proclaimed “gang” and have an unbreakable bond on and off the ice. They have a special handshake they do after every win. They became best of friends over the past few years.

As freshmen, they came into a program that won merely three games the year before. But they helped lift the program to unimaginable heights. The Bobcats won 19 games in their freshman year, in large part to Vigilanti’s success. She led the country in save percentage and goals against average in just her first year.

“We probably wouldn’t be where we are now without her,” Boulton said. “When she came in as a freshman, it looked like she had been in this league before because of how good she was playing.”

In the 2009-10 season, the Bobcats went on a 12-1-2 run late in the year. Vigilanti allowed one or fewer goals in 14 of those 15 games. She made 57 saves in a five-overtime game vs. Rensselaer in the deciding game of the ECAC Hockey quarterfinals, the first time the Bobcats made the ECAC Hockey playoffs in program history.

“We were lacking in goaltending before she got here, so we were thankful to see her,” Quinnipiac head coach Rick Seeley said. “She just had incredible gaudy numbers that first year.”

Seeley said teams stayed away from Vigilanti because of her size–she stands a mere 5-foot-2 on the ice, just a little bit taller than the goal.

“We never thought of it as a deterrent for us,” Seeley said. “She’s just a great goaltender.”

Vigilanti was named ECAC Hockey goalie of the year as a freshman after posting a goals against average of 1.25 and saving 95 percent of total shots. Yet while she got the publicity, she credited her strong defensive unit.

“Freshman year I might have gotten all of the limelight, but it was the defense,” Vigilanti said. “…Having a defensive core like that is awesome. It’s so much easier for a goalie to make those saves and not have to worry about the second shot.”

She said she felt like she had a monkey on her back during her sophomore year to replicate those numbers. Her numbers were still very impressive: a 1.68 goals against average and .932 save percentage, but stopped thinking about the numbers after sophomore year.

“I think after sophomore year, I let it go and was like, ‘I’m gonna play my game,’” she said. “I might not get those numbers there, but as long as the team is doing well and as long as I’m helping the team get where we need to be, that’s all that really matters.”

Boulton has recorded a positive +/- rating in each of her four years, and this year has recorded a career-high 24 assists. She started playing as a forward, but didn’t switch to a defenseman until the 11th grade. She played for Balmoral Hall in Winnipeg, Manitoba.

“I feel like it’s given me a whole new perspective on the game, playing both positions,” Boulton said. “It’s so much easier to read plays and read the ice. I used to have a forward mindset, so it’s kind of easier to read what they’re gonna do in games.”

For Vigilanti, she has the most confidence in Boulton that she can defend against anyone.

“Knowing Boots is on the ice at all times, I have so much faith in her when she’s on the ice,” Vigilanti said. “…I know she’ll give everything for me in front of the net. She does everything she can for herself, for me and for the team.”

The two bonded almost immediately when they came to Quinnipiac. Despite living nearly 23 hours away from each other, they instantly got along with each other, and their friendship is stronger than ever.

“I don’t have a better friend than I have in Boots,” Vigilant said. “We clicked ever since we met freshman year. We were like two peas in a pod. We didn’t want to leave each other’s side, so we’ve been roommates pretty much ever since sophomore year; freshman year we hung out every day, so we were pretty much roommates.”

When she skates onto the ice, Vigilanti’s superstitions continue. She picks a different number each year and bases how she cleans the ice in the crease each time off the number. This year’s number: seven.

“I do it the same number of times,” Vigilanti said. “… Seven seconds until I go on the ice, I count down, I do seven shuffles [on] each side of my net.”

Vigilanti rarely talks about goals the team allowed. If it’s mentioned, she would knock on her head, reminding her of it. She says everyone, even the coaches, have adapted to her superstitions.

“It became the norm,” Seeley said. “You just don’t notice after a while.”

Before home games, one pre-game ritual they have is playing NHL 12 on PlayStation 3. They created their own team (the Hartford Wildcats) and all the players on their team are Bobcats.

“We usually win because we rate each other a 99 percent,” Vigilanti said, smiling.

As much fun as they have off the ice, they can find a balance of fun and seriousness on it.

“We communicate really well on the ice,” Boulton said. “She just calms everything down so much … If she yells at me, I know it’s for the good of the team. I don’t take it personally.”

Vigilanti has already gone down as the best goaltender in program history. Her career goals against average is more than one goal better than the next netminder on the list–and that was before this year began. She also has the most wins and best save percentage in Quinnipiac women’s ice hockey history.

Boulton, meanwhile, has the second-most points of anyone to don a Bobcat uniform. If it weren’t for Kelly Babstock’s remarkable career thus far, she would be the program’s all-time points leader.
Yet the numbers will only tell half of their legacy.

“They’re two of the key players that when you look back at the history of Quinnipiac hockey,” Seeley said, “they’re gonna be the ones that were instrumental in turning that corner.”