Flipping onto the scene 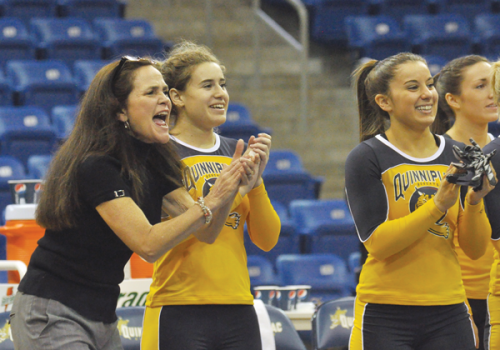 Imagine being able to do a full front flip in less than half a second, your body parallel to the ground with no hands for support, and landing effortlessly back on your feet.

Only, it isn’t an imagination; it’s a reality.

Mary Ann Powers, now in her 15th season as head coach of the acrobatics and tumbling team, is the coordinator of these physical feats.

“I think I have reasonably high expectations founded on the fact that this team is extremely focused, extremely dedicated to each other and their strength and conditioning training,” Powers said. “They’re not afraid.”
[media-credit name=”Matt Eisenberg” align=”alignright” width=”300″] 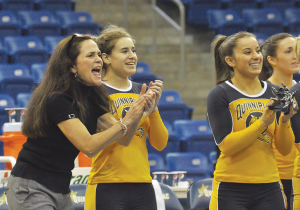 [/media-credit]
In the autumn of 2012, Powers, along with all the other coaches of the National Collegiate Athletics and Tumbling Association (NCATA), were invited by Tanya Case, a member of the Board of the Federation of International Gymnastics, to watch the World ACRO Team compete and learn new coaching and training methods for their teams.

This experience prompted Powers to create a new move that she put into her team’s routine. Don’t be confused, however. This is not your typical cheer event.

There are six total events with various amounts of heats within each event. The compulsory event includes a tumbling, pyramid, ACRO, and basket toss heat. The necessary skills are dictated beforehand and the opponents must perform identical routines. The start value for points is automatically 10, the highest value, and execution determines the end result.

After the compulsory teams compete in three different rounds of ACRO, each with a specific requirement, the teams then follow up with Basket Toss events.

“This is very gymnastic-like,” Powers said, noting its discrepancy to cheerleading.

The idea is to accumulate the most points, but with the stunts that these athletes are performing, taking into consideration execution and safety is critical “As a coach, I would be crazy to just go for difficulty; it wouldn’t be safe,” Powers said. “But the idea that they could get to a 10 is exciting for the fans.”

Erin Trotman, the new assistant coach, was one of the athletes under Powers who performed these jaw-dropping events. An All-American in her senior year and a two-time captain, she brings a lot of experience to the table.

“She [Trotman] knows the sport, cold,” Powers said. “She is going to make that connection with a player maybe better than I would because she can understand it from the athletic point of view.”

While Trotman returned as a coach, some other returning athletes are on notice. At the top of Powers’ list are Christina Lasto, Stephanie Palange, Christine Rochester, Danielle Burns and Jenna Quenneville.
“I feel like I’m leaving somebody out,” Powers exclaimed, noting the depth and talent of all her athletes.

As for the freshmen looking to make some noise, she pointed out Kayla McCormack, Demitra Germanakos, Montera Tomasetti and Taylor Johnson.

“The cool thing about them is that they’re ready for anything” Powers said. “It’s beyond hunger. Even in their preseason training they were concerned about becoming the best player they could be.”

It was hard, however, for Powers to make up her mind. While it comes with having a 32-person roster, she is amazed with the depth of her team.

“I could throw out so many names,” she said, showing how each athlete has a case as to why they are on the team.

This spring the team has been selected to host the NCATA National Championship on April 25-27 at the TD Bank Sports Center.

“I feel great about it,” said Powers. “I’m hoping to bring in some great halftime entertainment. I know that Quinnipiac is going to do a great job.”

Earlier this winter, the team performed for the local high schools. The feedback was nothing but positive as girls in the audience were amazed by the flips, tosses, and handsprings they were witnessing. In a word, the event was unimaginable.