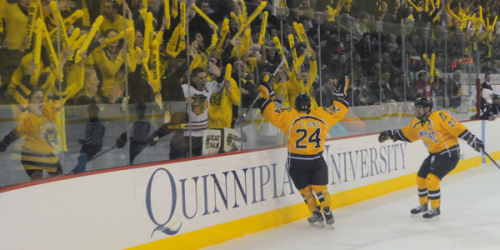 Eric Hartzell remembers the first time he stood between the pipes against the Yale Bulldogs. The date was Feb. 18, 2011, and the then sophomore let through four Bulldogs scores before being pulled prior to the third period.

Fast-forward two years later, and the same goaltender has recorded a 1.46 goals against average in his Hobey Baker candidate senior season. Hartzell didn’t let any Quinnipiac fans go home unhappy following the seventh annual Heroes Hat Championship between the Bobcats and the Bulldogs. 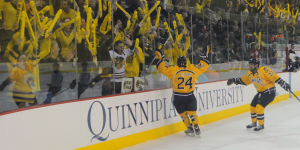 [/media-credit]“It’s never easy playing Yale, they’re a tough team,” Hartzell said. “Last time we played them, they were fortunate enough to get the first two goals. I don’t think the boys let up at all tonight. It was great.”

Top-ranked Quinnipiac defeated No. 13 Yale, 4-1, Friday at High Point Solutions Arena at TD Bank Sports Center, sweeping the season series against the Bulldogs and taking the Heroes Hat for the first time since 2010. Hartzell stopped 30 of 31 shots he faced, while the Bobcats took 35 shots on goal.

“It was a great crowd, electric atmosphere,” Pecknold said. “That’s why we built this rink, to get something like tonight. It was pretty special.”

The Bobcats opened the contest with an early score at 3:03 in the first, when Matthew Peca notched his 10th goal of the year from the low slot. Peca skated up the middle, before snapping a shot at the low-blocker side, bouncing off goaltender Connor Wilson and in for the 1-0 lead.

Then, in the 17th minute of play, Kellen Jones knocked the puck away in a battle on the far side boards. Jones then skated into a 2-on-1 with twin brother Connor, grabbing the twine on another low-blocker side shot for the two-goal advantage.

Quinnipiac’s first period offensive assault didn’t end there, however. Forty-seven seconds later, Travis St. Denis corralled the puck in a scrum in front of the crease. St. Denis then skated up to the right slot, later backhanding a shot past Wilson to push the Bobcat’s lead to three.

After Wilson was replaced between the posts for Nick Maricic, the second stanza featured unsuccessful scoring chances for both squads. Early in the period, Yale forward Kenny Agostino drew iron on a shot by the hash marks. Near the end of the frame, Agostino collected the puck in the neutral zone, later losing control on a breakaway. Kellen Jones followed up with a breakaway of his own seconds later, only to be stoned by Maricic with the glove.

Yale’s only goal of the night came off the stick of Agostino early in the third period, batting in a rebound off Hartzell. Later, with 35 seconds remaining in the third and Maricic pulled, Connor Jones added an empty net tally, good for his ninth of the year.

Both teams combined to go 0 for 11 on the power play.

Quinnipiac looks to extend its winning streak to three games tomorrow when it hosts Brown on Senior Night at 7 p.m.