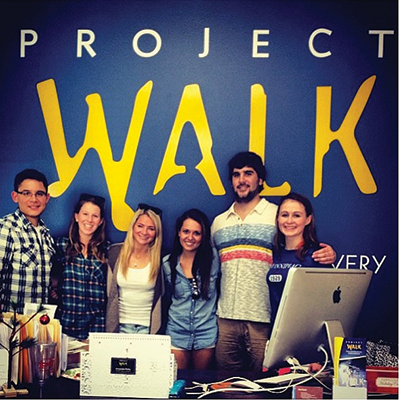 When most Quinnipiac students went home for winter break, they relaxed and soaked up the uneventfulness that filled their day. But for six film, video, and interactive media (FVI) students, their time off was spent filming and editing a documentary for a life-changing cause.

The idea for the documentary was inspired by Barney Miller, a friend of Montemarano’s, who became a quadriplegic after a car accident. He was told he would never walk or breathe without assistance again. However, after discovering the organization Project Walk in 2009, his life was changed forever, Montemarano said.

“To say that this was a learning experience would be an understatement. Everyday they opened our eyes to something new,” Fajt said.

The group spent months in pre-production, coordinating with the director of Project Walk and contacting different clients willing to participate in the documentary. After its original plan to visit the Project Walk facility in San Diego fell through, the group set its sights on Orlando, and over winter break, it set out for a two-week adventure.

The Orlando facility is “an environment filled with support, hope and motivation to provide those living with a spinal cord injury the opportunity to achieve their greatest recovery potential and an overall increased quality of life,” Fajt said.

They followed four different clients — Amanda, Aaron, Robert, and Cara — whose optimism and determination set an inspirational tone for the film, as well as for the students creating it.

Montemarano discussed the controversial side of Project Walk, and said many of the theories it bases its practice on have very little scientific backing, but despite that, the program seems to be working for the clients.