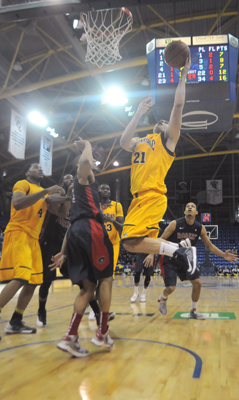 Men’s basketball downed Northeast Conference rival Robert Morris Thursday evening at the TD Bank Sports Center, 63-61. Evan Conti led the Bobcats with a career-high 18 points in the teams third straight win. The Bobcats improve to 11-13 overall and now stand at 7-5 in the conference.

Conti went 7-for-11 for the night, including the winning basket with 13 seconds left and then added a free throw with .9 seconds left on the clock. Ike Azotam chipped in with a double-double with 10 points and 10 rebounds, all 10 points coming in the second half to spark the offense. Ousmane Drame also scored 10 points and pulled down a game-high 15 rebounds.
[media-credit name=”Matt Eisenberg” align=”alignright” width=”179″] 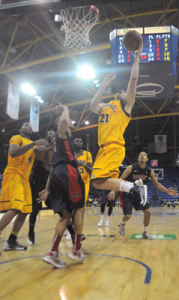 [/media-credit]
“It was just a matter of him getting opportunities,” head coach Tom Moore said about Conti. “And he forced those opportunities by how well he played in practice. Those threes he makes and those shots he makes are the ones he makes in practice everyday.”

The Bobcats were down as much as 14 points in the first half. But Conti’s strong performance kept them alive helping them head into halftime with a one point lead, 30-29.

The second half consisted of multiple lead changes until Conti scored a layup with 1:18 remaining on the clock to tie the game. This basket would be the last time the Bobcats had a lead change with the Colonials.

“Every game is so important for us right now, so we have to go out there and get every one of them,” said Conti.

The Bobcats out rebounded the Colonials 45-25 and shot 70.8% from the free throw line.

“It’s great to beat a team that is really really good when you don’t feel like you have a lot of guys playing over their heads,” Moore said.