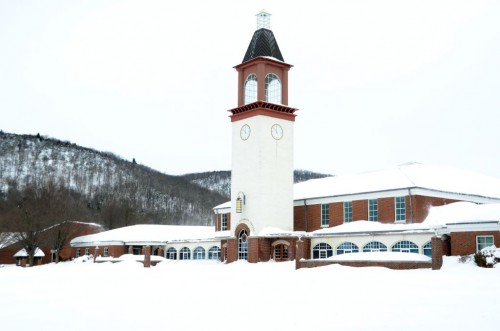 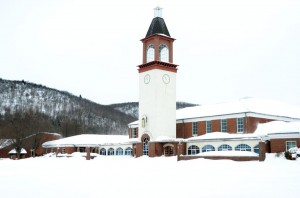 [/media-credit]Snow removal on Quinnipiac’s three campuses continued through Monday, and an update from Keith Woodward, associate vice president for facilities and a member of the Emergency Management Team, appeared on MyQ this afternoon.

According to the MyQ update, some of the factors that prevent the university from reopening include parking lots and surrounding streets that are still being cleared. In some cases, snow is being taken by dump trucks to the empty parking lot that connects Whitney Ave. and New Road.

Quinnipiac’s shuttle busses are also still snowed in at the Dattco lot. Once this lot is cleared, only a few drivers would be available as many employees are still snowed in and unable to make it to campus.

“The decision not to run the shuttles was made in conjunction with Public Safety and Dattco,” Director of Emergency Management John Twining said. “As in every decision we make the safety of students is our major concern.”

“As soon as the walkways were opened and it was safe for students to travel about campus the library was reopened,” Twining said.

Whether or not the university remains closed through Wednesday is still undecided. The Emergency Management Team is operating on a day-by-day basis and plans to make a decision regarding the following day before 2 p.m. each day.

According to Twining, after Hurricane Sandy, keeping up the communication between the Emergency Management Team and the Quinnipiac community has become a “higher priority.”

Facilities personnel have worked around the clock since Friday to clear the parking lots and roads surrounding Quinnipiac’s three campuses.

Only one lane of Mount Carmel Avenue  has been plowed beyond Hogan Road to the Human Resources building and other faculty offices. The Whitney and Ives intersection also only has one lane available..

At 1 p.m. today, workers began plowing the front parking lot of the North Haven Campus and had already cleared the entrance near the Health Sciences dean’s suite.

According the announcement, Ireland’s Great Hunger Museum, QU Online and AM 1220 WQUN have all been cleared and are all accessible from Whitney Ave. The Polling Institute still needs to be cleared.

The MyQ update advised any students traveling to proceed with caution, as road conditions still aren’t ideal and may get slicker as the night progresses.